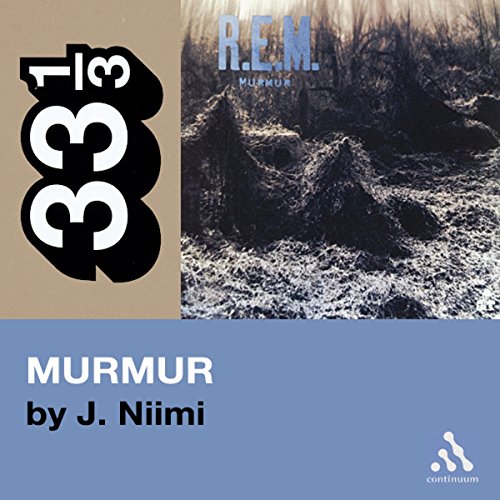 J. Niimi begins his entry to the 33 1/3 series with a sequence of quotes on poetry and art one of which is from R.E.M. frontman Michael Stype: "Don't dissect us in a clinical linear way; come at it from somewhere else." To that end he analyzes their debut album, Murmur, track by track, and it's lyrical content, but with an ear for the vaguer qualities of art. He presents it as a Southern gothic work of art, describing Athens, Georgia and the America of the early '80s. Fred Berman performs the audiobook with his warm and smooth voice adding to the satisfying and interesting experience of Niimi's cultural and musical musings centered around one of the heralding works of the American indie music movement.

R.E.M.'s debut album, released in 1983, was so far removed from the prevailing trends of American popular music that it still sounds miraculous and out of time today.

J. Niimi tells the story of the album's genesis - with fascinating input from Don Dixon and Mitch Easter. He also investigates Michael Stipe's hypnotic, mysterious lyrics, and makes the case for Murmur as a work of Southern Gothic art.

Pop music was never so high-brow.

Would you consider the audio edition of R.E.M.'s Murmur (33 1/3 Series) to be better than the print version?

I love hearing about the minutiae of an album I'd never really heard from I band I don't particularly like. The narration was, at times, mesmeric - something print couldn't have achieved. I even enjoyed listening to the deadpan, emotionless reading of the lyrics in the appendices.

Would you be willing to try another book from J. Niimi? Why or why not?

Yes. He could bring gravity to outer space if he tried hard enough. A genius.

Which character – as performed by Fred Berman – was your favourite?

The character of the audiophile obsessed with R.E.M.'s debut, with a penchant for Greek Myth, semiotics and literary theory.

Audiophiles and R.E.M. fanatics will love the detail of this production. The sleeve, the lyrics, the instruments, the recording equipment and personnel, the studio, the band history in a nutshell, the reference to gothic literature and Greek myth - it is, and so much very more, all there. I hope someone one day writes a similar tome about Virtue, by Emmy the Great.

If you, like I, love this album, do not buy this book or the audio file. I am ashamed that I spent money on this. The author goes WAAAAYYYYYY off topic for the sake of proving some opaque, pseudo-intellectual discourse on everything from "Southern Gothic" to reverb. While both of the aforementioned qualities may be attributed to Murmur, one DOES NOT need some deprived drummer to wax philosophical on mere speculations. I am astounded that this fine book series (33) allowed for this tripe to be published. God bless free thinking minds, and f-ck all those who waste others' time and money. Listen to the music and enjoy your own trip. I hear enough of this sh-t at college.

A must for all REM fans and, or, recording geeks.

Not insightful as artistic analysis and not interesting as journalistic storytelling.

One chapter actually just describes each of the songs in cloying detail. Others aspire to analysis of the album's tone and of Stipe's lyric writing, but end up spending more time introducing and explaining ideas than actually connecting those ideas to the album and/or telling the reader why they're relevant.