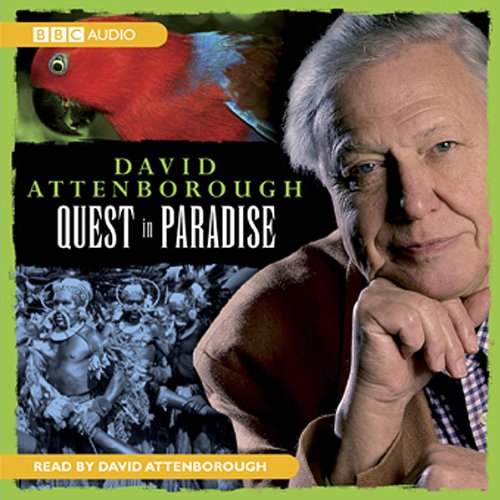 Following his expedition to Indonesia, as told in Zoo Quest For A Dragon, David Attenborough's next animal collecting and filming trip was to New Guinea, home of the exotic Birds of Paradise.

The quest demanded hazardous treks across treachorous terrain in the Jimi Valley and on the edges of uncharted territory. But the arduous adventures were finally rewarded when, as the camera turned, a Count Raggi's Bird of Paradise enthralled him with its frenzied dance.

What listeners say about Quest in Paradise

Great story. Almost felt as if I was acutely there

Sir. Attenborough us a great narrator and him narrating his own book was truly fascinating.

Anyone who is a fan of conservation and learning of other lands and cultures should love this story.

What was one of the most memorable moments of Quest in Paradise?

The hardship of getting around this mountainous island and the uniqueness of the place.

David Attenborough is a born story teller. He clearly loves what he does. He paints the scenes with words.

A story from a lost time.