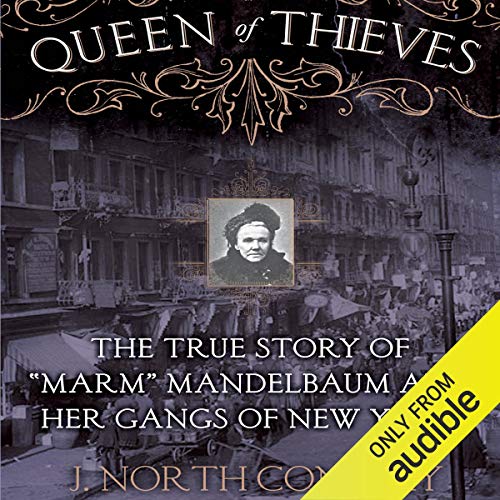 The True Story of "Marm" Mandelbaum and Her Gangs of New York
By: J. North Conway
Narrated by: Suzanne Toren
Length: 7 hrs and 19 mins
Categories: Biographies & Memoirs, Criminals
4 out of 5 stars 4.0 (3 ratings)

Queen of Thieves is the gritty, fast-paced story of Fredericka "Marm" Mandelbaum, a poor Jewish woman who rose to the top of her profession in organized crime during the Gilded Age in New York City. During her more than twenty-five-year reign as the country’s top receiver of stolen goods, she accumulated great wealth and power inconceivable for women engaged in business, legitimate or otherwise. The called Mandelbaum the nucleus and center of the whole organization of crime in New York City. Having emigrated from Germany in 1850, she began her climb to the top of the crime world as a peddler on the rough-and-tumble, crowded streets of the city. By 1880, she had amassed a fortune estimated at more than $1 million. Mandelbaum was known for running an orderly criminal enterprise. She enlisted the services of an extensive network of criminals of every ilk and bribed police officials, politicians, and judges. If someone wanted to move stolen goods, needed protection from the law, or sought money to finance a caper, Marm was the person to see.In 1884, Mandelbaum escaped from the clutches of Pinkerton detectives, who were casing her house, and fled to Canada. Mandelbaum lived out the rest of her life in luxury on a small farm with her family and ill-got fortune. Hundreds of people turned out for her funeral. Dozens of people later reported to police that they had their pockets picked at the service.

Interesting story of how one immigrant paid her bills. But a bit repetitive in a range of details...especially regarding her height, weight and appearance.

Great material but the presentation needs work. I think this book is better consumed in written form. that numerous sources cited cause unnecessary repetition of content.

Reads as too much of a thesis paper, less like historic story

Subject is interesting, but content is Very redundant, most facts and statements are repeated over and over. And it reads more as a college thesis paper than a published book. Shame. The reader and base story are good.

It was a very enjoyable listen

I enjoyed learning about the true story of "Marm" Mandelbaum and her Gangs of New York. It is a great learning experience about the state's history. This book is for a Criminal Justice Student, especially. Thank you, for its creation.