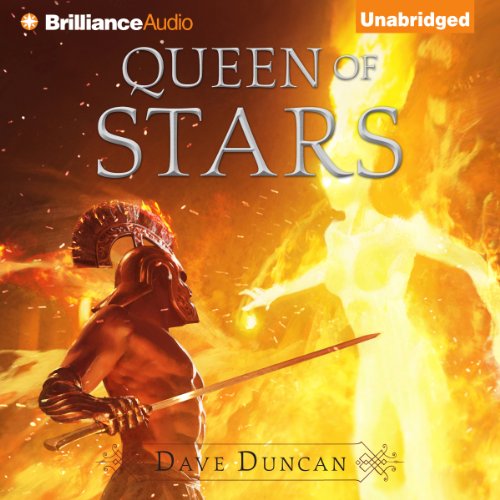 Rigel has found a new home and new love in the Starlands, the magical realm responsible for his half-human, half-elfin heritage. But despite ridding the kingdom of horrific monsters and using his unequaled swordsmanship to help a new queen ascend to the throne, he has no time to savor these early victories.

He’s been warned that if he remains in the Starlands much longer, his death is more than just likely - it’s inevitable. Now a deposed prince plots Queen Talitha’s ruin from the shadows while sending numerous assassins to claim Rigel’s life. Even worse, if Rigel and Talitha ever consummate their growing passion, it will only hasten the hero’s demise.

Yet Rigel refuses to be cowed by visions of doom. With enemies closing in on all sides and traitors already in their midst, he and Talitha risk all to secure lasting peace in the kingdom...but will the cost prove too high?

A Satisfying End to the Duology, With a Caveat

Warning: The audiobook does not have the true ending in it. You have to have the kindle or print book to get the actual ending. There are two or three more chapters after the end of this audiobook that only show up in the actual book. Other than that, it's a wonderful audiobook performance.

A good popcorn listen and very nice conclusion to the two part series.

This book, like the first one is just a very light, humorous read. It is campiness at its best. The characters aren't all that realistic or deep, nor do they have much growth (there is some though), but they are great to read about.

Eh, nothing really to say about this other than if you read the first, read this one, it's a fun read to kill time with. And it goes by quickly

The final 'book' of this story is now part of the Audible version. If you've listened to this before and were disappointed in the abrupt and unsatisfying conclusion, download it and enjoy the last two chapters that relate the rest of the story. Overall, an enjoyable duology with humor, intrigue, derring-do, and some interesting new fantastical ideas.

First I want to say if you hate endings that leave you hanging STAY AWAY. I wont say more than so as not to ruin the story.

You should read the first book in this series King of Swords before reading this one, as not doing so ill leave you wondering about a ton of things. This book as not as good as the first but does a great job of moving the story forward as a whole.

There is plenty of back stabbing "Court" intrigue,great fights and great magic, the book however leaves you hungry for more in a bad way. Books should tie up at least SOME ends before ending, this one really does not.

I will say in favor of the book that the fights are very well described, and the pacing is perfect. So to close, read the first book, if you enjoy it pick this one up. I really cant recommend starting here.

Where does Queen of Stars rank among all the audiobooks you’ve listened to so far?

What other book might you compare Queen of Stars to and why?

its definitely it own but if i had to relate it to another book series it would be The Woods Out Back.

He stepped out of the box and took fantasy to a new direction.

The Queen of Stars it was a perfect title and should stay the title.