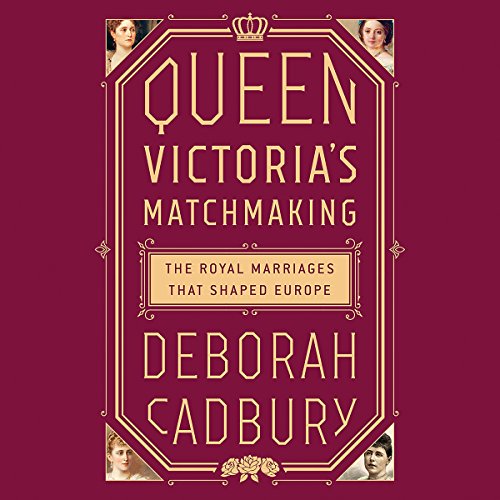 By: Deborah Cadbury
Narrated by: Charlotte Strevens
Try for £0.00

A captivating exploration of the role in which Queen Victoria exerted the most international power and influence: as a matchmaking grandmother.

As her reign approached its sixth decade, Queen Victoria's grandchildren numbered over 30, and to maintain and increase British royal power, she was determined to maneuver them into a series of dynastic marriages with the royal houses of Europe.

Yet for all their apparent obedience, her grandchildren often had plans of their own, fueled by strong wills and romantic hearts. Victoria's matchmaking plans were further complicated by the tumultuous international upheavals of the time: revolution and war were in the air, and kings and queens, princes and princesses were vulnerable targets.

Queen Victoria's Matchmaking travels through the glittering, decadent palaces of Europe from London to Saint Petersburg, weaving in scandals, political machinations, and family tensions to enthralling effect. It is at once an intimate portrait of a royal family and an examination of the conflict caused by the marriages the Queen arranged. At the heart of it all is Victoria herself: doting grandmother one moment, determined Queen Empress the next.

"[An] absorbing book... The fall of the Romanovs occupies the superb last pages of Cadbury's book... Dynastic mergers, we may deduce from Deborah Cadbury's account, offer no defence against the whims of history. This catastrophe-laced slice of royal history offers a ripping read." (Miranda Seymour, The Observer)

"A rich history of Queen Victoria's canny use of political power." (Bookpage)

"Engrossing...Cadbury engagingly presents [Queen Victoria] as a mesmerising Mrs Bennet, summoning her children and then her grandchildren to Balmoral. ..The stories of [Queen Victoria's] descendants are mesmerising and often stranger than fiction...From the pen of a writer of skill and style, this surprising narrative leaves you wanting more." (Paula Byrne, The Times)

The grandmother of Europe in word and deeds

This is an elegantly written account of Queen Victoria and her role as royal matchmaker. The author wisely focuses on only some of the Queens grandchildren, to include them all would require a book the size of war and peace, and this allows of a nice mixture of personal and political. Some of the figures and their stories were known to me notably Alix and Nicky the doomed last imperial couple of Russia. Others were not and I found myself learning a lot and being entertained also. Enjoyed the narration also, would recommend this book to anyone with an interest in not on Queen Victoria but the last years of the pan European monarchies.

Loved the peek into the last, especially the letters to and from the Queen and her family members

I bought this expecting a light entertaining listen but I got much more than I anticipated. Well written and researched. I enjoyed it much more than I thought I would. There was much more to Victoria’s matchmaking than just a meddling granny. I loved how it was wrapped up at the end. Much to consider.

• When it came to the Royals I knew well, I was riveted to learn new details about them.

• When it came to the Royals I knew a little, I feel like I learned more about them and the book held my interest.

• When it came to the Royals I knew nothing about, I was completely lost!

Very well written and very well performed!! I’m off to learn more! Thanks so much for all the hard work and research done by so many!!