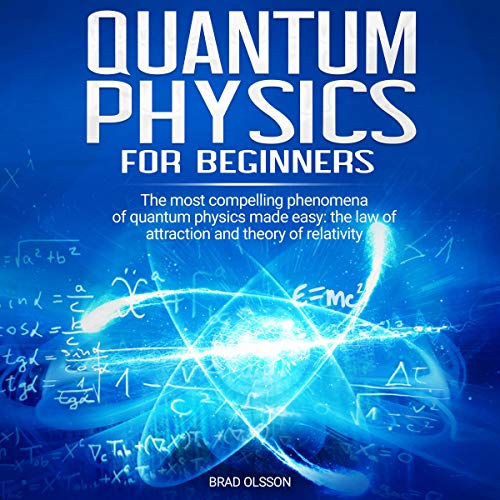 By: Brad Olsson
Narrated by: Aaron Miller
Try for £0.00

The truth is: When you look at it from an external point of view, the term Quantum Physics can be quite intimidating.

It is very complex and sometimes even professional physicists have a hard time trying to find their way around quantum physics, as it can seem quite counter intuitive. But even if it is difficult and complex to understand, it is nowhere close to being incomprehensible. There are a few key concepts of Quantum Physics, around which the whole subject revolves. If you know and understand these concepts, then you’ll find that it is very easy to understand how quantum physics functions.

First of all, you need to know that everything within the universe is made up of waves and particles. Yes, both of them at the same time. This is called the dual nature of substances. This seems quite crazy, and hard to believe, but both of these conclusions have been derived from numerous scientific experiments.

The second thing that you must understand, and accept is that when it comes to quantum physics, it is almost impossible to predict the exact result of an experiment on a quantum system. There can only probability, no certainty, leading us to the conclusion that quantum physics is probabilistic.

And last, but not the least, you must understand that quantum physics is very small, more often than not. This means that the study of quantum mechanics is well observed when the subject particles are extremely small. This is due the fact that quantum effects that are involved in the processes get smaller as the objects increase in size. As a result, quantum behaviors are hard to find.

Buy: Quantum Physics for Beginners, a beginner’s guide to unravel the basic mysteries of quantum physics, and a comprehensive course to help people understand it better.

Quantum Physics is an integral part of our lives and it is extremely important for us to have at least the basic knowledge on the subject. Most of the people struggle with it as there are scarcely any books on the topic that is compatible with the needs and demands of people who are just starting out as physicists, and need a simple guide to understand the concepts.

The goal of the audiobook is simple: To help people have a better understanding of quantum physics in the most simplest of ways possible.

You will also learn:

Buy the audiobook, Quantum Physics for Beginners by Brad Olsson to have a good knowledge of quantum physics and mechanics.

What listeners say about Quantum Physics for Beginners

still not sure if that is a robot voice. repetitions everywhere. awkward listening - I am guessing it would be much better to read.

I am so grateful to listening this fantastic book

Hi I truly delighted in perusing this straightforward book. It would be ideal if you compose more books. I will peruse them all. Furthermore, a debt of gratitude is in order for helping me to see the entirety of the disarray of knowing who we truly are. The book was Amazing!!!!

I am very satisfied with this book.

Quantum Physics for Beginners is an excellent guide on how to understand such a difficult subject. The author constructs the book in a way that you can understand the general concept of the topic even if you do not understand all the points of the subject outright. The Author covered and thoroughly explained the most confusing aspect of the topic like the double-slit experiment, wave-particle duality, and the building blocks of matter and wave-particle duality along with what the topic is in general and an overview of the Mystifying Science as well!

This audiobook is Inspirational and great listen

As a total novice to Quantum Physics, I found the book, fascinating and well listen , (to quote the words of super tramps the logical song ! ) for such a simple man ( meaning me of course )The book and Author, have provided me with the initial curiosity to pick up and follow that Quantum Thread !

So many great tips and advice give this audiobook

This is an agreeable, simple to guess book about an absolutely thoughts bowing subject. It might have transformed me, yet on the off chance that you are keen on Quantum Physics, by all methods read it! Enormous credit to the author for their stunning book.

I would energetically suggest this book everybody

Great audiobook. Compelling and well-organized. Some concepts remain only understandable superficially, but after all they are arguments that only experts can understand at a deeper level. What is understandable to the everyman is truly well explained.

I was impressed by every chapter of the book.

Thanks, author for such an incredible audio book.

The author has succeeded in the difficult task of simplifying, as much as possible a subject basically incomprehensible without the necessary basis. The text is well written without any mathematical formula or equation, which would have been completely useless in this case. He gives a great introduction to quantum physics to the layman and to anyone who is passionate about physics, but doesn’t have the academic basis. Fantastic audiobook.

I don't have the foggiest idea where anybody gets the possibility that any clarification could make this subject straightforward. My eyes were crossed more than once. I did, be that as it may, some way or another leave away with substantially more of a grip of quantum physics than I would have accepted conceivable. Credit for a charming and instructive excursion.

Highly Recommended for all to listen this book

The argument certainly isn’t very simple. But the author was able to give explanations that can be understood even by people who aren’t knowledgeable in the matter. Some concepts remain rather hard to understand, but that is because the subject is difficult to understand. The author did a wonderful job at making it as easy to understand as possible, at least intuitively. Recommended.

Most Useful book for Quantum Physics

A good surprise. The audiobook starts with a detailed but fun and concise explanation of the main concepts which have been discussed by the scientific community in the last century, walks through all the problems and experiments, and ends with a very clear explanation off all the different interpretations of quantum physics. A must-have for the casual lover of quantum physics and for anyone who wants to have a clear description of all the problems that the physicists have not yet been able to solve.