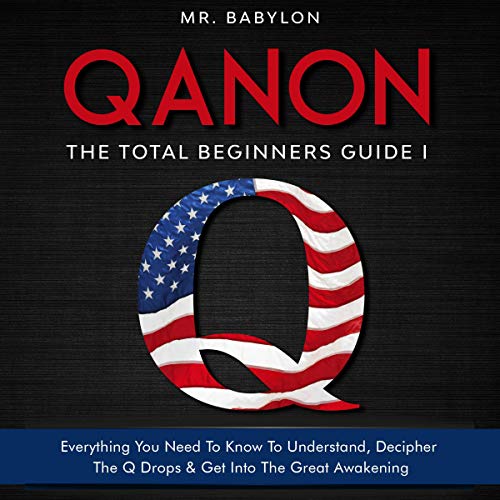 QAnon: The Total Beginners Guide I

The Great Awakening has started!

Do you want to learn everything you need to know to decipher the Q drops and get into the great awakening? If yes, then keep reading!

This book, as a matter of record for now and the future, presents Q, the president, and the QAnon group in a straightforward way. Without them, the Great Awakening would never have begun, and we would not now be seeing it grow into what the evidence suggests is literally a global awakening.

President Trump spoke of "the calm before the storm" shortly after his inauguration. That calm has long since gone, replaced by virulent opposition to his occupation of the White House and ever-increasing efforts to have him unseated because having told the world that America rejects globalism, he served notice that the days of the Deep State are numbered.

This audiobook covers the following topics:

The QAnon movement has become a complicated web of information that is only growing more and more bizarre every day. It is no simple feat to delve into the movement and try to understand it.

However, this guide is meant to help you sort through the QAnon's complex network. This list of terms, concepts, and general jargon from the QAnon movement was pulled together to help you better understand just what you are getting yourself into.

What listeners say about QAnon: The Total Beginners Guide I

Super easy to understand and informative. It broke down complicated information to simple understanding.Amazing Audiobook

I didn't think the topic was so interesting! congratulations to the author for having clearly explained this Q anon phenomenon which I have heard so much about but which I did not know.

I found this report on QAnon to be very comprehensive. It helps to understand the drops of Qanon Phenomenon! Congratulations to the author.

I love the audible. I thought the author was eloquent and the information interesting and fair. Some of the Siri presented I have to question but overall I sincerely enjoyed it.

I would highly recommend this audiobook

I would highly recommend this audiobook to anyone interested in politics. I found the information provided to be highly educational in depicting political conspiracies.

This audiobook goes into how the government and the media plays a role in influencing what people believe when it comes to what is going on around them, and how to react and behave to the information given.

This audiobook opened my eyes

The QAnon movement is complex and this audiobook opened my eyes. .The main focus of the audiobook is political conspiracies and fighting against the Evil Doer.

It helped me to understand concepts

It helped me to understand the concepts and general jargon they use. This is not something that is meant to be understood in a day but rather slowly digest the information and let it sink in.

I am interested in conspiracy theories and this audiobook is great. While it may not be for everyone I like how it gets into conspiracies within our government. Gives you a lot to think about what is going on right now.

Break out your Ovaltine Decoder Ring

Decipher the Q droppings with the assistance of the duty booty crumb snatchers that will cook up a load of crap!! If there is an awakening it is becoming aware of just how corrupt our political system has become. Joe Biden and his Crime Family with their old fashioned pay to play / buy access to power scam comes to mind. So how do you become a multi-millionaire and own five homes on a government pay check??? Multiply that question times hundreds of politicians and you have an awakening of sorts. Something stinks just sayin...

This is a great inspirational audiobook

I am firmly convinced of the good intentions of Q and his followers: opening our eyes and waking up starting to reject what is rotten around us seems to be good and right!

Very comprehensive and pleasant to listen to the audible. It has certainly enriched and educated me! I highly recommend this audiobook to anyone interested in learning more.

Although I am not very fond of politics, I have read this audible with great interest and, at times, with grave disappointment at the state in which the "deep state" has reduced my beloved America. it opened my eyes and made me wake up!

Everything is clearly explained here

After listening to the audible I decided to investigate the topic further by searching for it on the internet, and, as anticipated by the author, I had a lot of difficulties due to the censorship to which QAnon and the topics connected to it are subjected: it is scandalous that in 2020 do not allow people to listen to what they want!

I liked this audiobook

This audible like this are welcome, which inform and open the eyes of the people.

I search it very intriguing and it brought up ideas that I've never thought of before.

It has been a very interesting listen

There is a lot of behind the scenes action going on in our world. Get an insight into a conspiracy theory that seems to span the globe. This has been a very interesting listen.

This audiobook explains everything

This is the most beautiful audiobook I have ever listened. It is an audiobook created by Frank R. Cowley. It's about good vs evil. It's about taking our country back and living in peace and prosperity.

If you value the truth and have always thought something was wrong in our world then you need to listen this book. I have been following the Q movement on YouTube for over a year and what an eye-opener.