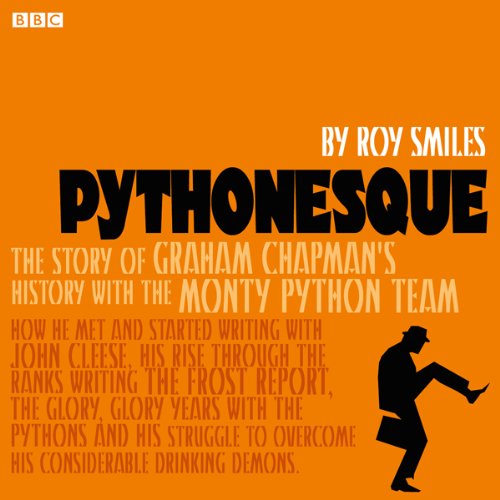 The story of Graham Chapman's history with the Monty Python team; how he met and started writing with John Cleese, his rise through the ranks writing The Frost Report, the glory, glory years with the Pythons and his struggle to overcome his considerable drinking demons. And how the collective kindness of Messrs Cleese, Jones, Idle, Palin and Gilliam saved him from oblivion and gave him the lead in the two funniest British films of all time: Monty Python and The Holy Grail and Monty Python's Life of Brian.

Apparently Chapman was recruited into the RAF at birth and flew bombing missions over Germany in a pram; Cleese got into the Footlights by doing a rather peculiar walk; Chapman had to take a test to become an alcoholic; Cleese returned to a pet shop to sing the praises of a recently purchased budgie and Chapman discovered on his last day on earth that Death likes Spam and drives a Ford Anglia. Written by Roy Smiles.

What listeners say about Pythonesque

A Most Delightful & Unexpected Biography!

What did you love best about Pythonesque?

It was done in voices that you will swear are the original characters. If you loved Monty Python, Life of Brian and anything else done by the Python crew (and why else would you be reading this?), you will find this a wonderful listen. Madcap, funny and moving.

Graham Chapman, since he was the lead character, was my favorite but they were all fun. You have to listen to understand.

Which character ??? as performed by Roy Smiles ??? was your favorite?

Listen for yourself and then try to make a decision. It's impossible.

It was too short. I listened to it on a long drive and I did not want it to end. My husband in the car ahead was concerned to see me laughing out loud so often.

I grew up watching Monty Python every Thursday night while babysitting for the neighbors. I have also enjoyed the movies and post-Monty Python projects that the fellows have done. But I was rather unaware of the behind-the-scenes lives of the crew. This book filled in some of the gaps. This has to be the most unusual performance I have ever listened to in the four years of my Audible membership. To say more would take away the fun of discovery for the next listener. If you loved Monty Python, listen.