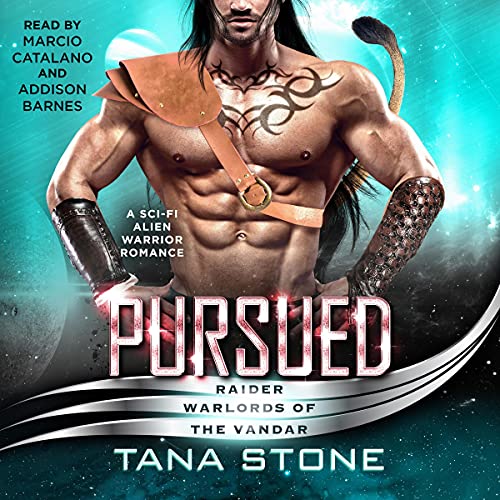 By: Tana Stone
Narrated by: Marcio Catalano,Addison Barnes
Try for £0.00

As the empire’s most ruthless female assassin, I’m used to killing without a second thought. But I’ve never infiltrated a raider horde before. Or seduced after a vicious Vandar warlord.

When I contrive to be captured by the raiders who terrorize the galaxy, my plan is to seduce Raas Bron before I assassinate him. That’s before I lay eyes on the huge, menacing Vandar with his long, dark hair and even longer tail. Despite his size and fierce reputation, the dominant warlord is no brainless beast. He’s a formidable foe who takes me to his bed and fires something within me that’s long been dormant. Soon, I don’t know if I’m seducing him, or if he’s seducing me.

The longer I pursue Raas, the harder it is to remember my mission. Even as the alien warlord claims my body as his, I attempt to protect my heart and remind myself of my duty.

Can I fulfill my promise to the empire, or will I lose myself in the passionate raider’s desire to possess me - body and soul? If I don’t kill the warlord who’s claimed me, I know I'll become the one pursued by the empire. And the empire does not show mercy to rogue assassins.

Pursued is a full-length sci-fi romance novel with an HEA and no cheating. It features steamy scenes on a raider warship, alien horde space battles, and some serious heat.

If you like dominant and dangerous alien warriors, alien abduction to seduction, and hidden identity romance, you’ll love Pursued, the third book in Tana Stone’s sci-fi romance Raider Warlords of the Vandar series. Each book can be listened to as a stand-alone.

What listeners say about Pursued: A Sci-fi Alien Warrior Romance

the series up until this point has been quite good. I did not car for this particular installment though. The fml was not Believable as a top Assassin. An came acrossed as umm unlikable and dull. This is just my opinion though. I have Thoroughly enjoyed all of the other books that Tana Stone has done an highly recommend them. That being said I look forward to the next book in this series. The narrative was very good.

TLDR; Ok story and narration, more of the same

I got really bored with this story. By the time the couple got together I was ready for it to be over. The last half of the book was OK and dangled some new warriors that might enter later, but nothing new otherwise.

What I was hoping for was two people that had to deal with unexpected mating marks when neither of them really wanted it. However that wasn't the plot so instead it was more of the same - get together, have lots of sex, do a betrayal or silly action, get redemption or saved, get mating marks.

What could have been a comedy of errors and dealing with fate forcing their hands, turned into rinse and repeat. Maybe the next book will be more in line with my expectations, but I doubt it. I'm hoping a Brianne of Tarth type character shows up soon, but I'm not going to hold my breath. I'll just have to wait and see if the next book holds my attention to decide on continuing with this series.

The narration wasn't the best. I have not idea what is going on with Addison Barnes, but her speech is impaired. It was more noticeable in this book than the others and at times it was distracting. Marcio was great, but some of his male voices are silly, but overall still enjoyable narration from him.