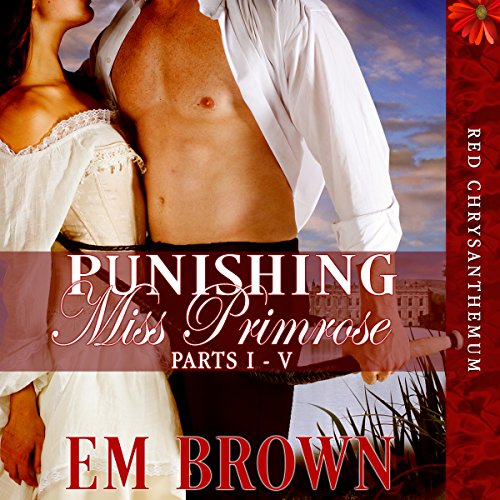 Miss Primrose needs to be punished.

A member of the wickedly wanton Inn of the Red Chrysanthemum, where the most taboo and illicit pleasures are indulged, Miss Primrose - or Mistress Primrose, as she prefers - left Nicholas Edelton a shell of a man. Now his older brother, Spencer Edelton, the Marquess of Carey, intends to provide her a set-down she will never forget.

Weary from exacting her revenge upon the man who raped her sister, Beatrice Primrose has had her fill of men of privilege and presumption, but she accepts a fateful invitation from a handsome nobleman to spend a sennight at his estate for a grand sum of money. She soon learns, however, that she will not get to reprise her role as Mistress. To her horror, she finds his lordship expects her to submit to him!

But Beatrice won't give in so easily.

In a clash of wills, fueled by vengeance and lust, Lord Carey and Miss Primrose wrestle for dominance in, and out of, the bedchamber. Their biggest struggle, however, may be against their own desires....

I enjoyed the first book (part 1-5) in this series and look forward to the next book. Em Brown is a wonderful author of naughty stories with a twist. I would recommend this series

couldnt even finish ....total bore and the narrators voice was annoying beyond words. need a refund.

Super steamy historical. Loved this listen, great story and characters. Great narrator too! I received a review copy of this audiobook at my request and I have voluntarily left this review.

Loved this book and was sad it was over

His lordship has completely gotten something wrong, thinking his younger brother had been taken advantage of by none other than a Harlot, so he decides to turn the tables on the Mistress.. I just don't think they both expected to begrudgingly enjoy the roll reversals. I enjoyed this book as well as the Narrator, who also happens to be the author. Can't wait to read the other books in this series.. it definitely left you hanging I was given this free review copy audiobook at my request and have voluntarily left this review.

Punishing Miss Primrose, Parts One through Five was a great read. Miss Primrose works at the Inn of the Red Chrysanthemum where taboo pleasures are the norm. Miss Primrose is looking for vengeance on the men who raped her sister. Little does she know it will lead her to the biggest battle of wills.

First, a note: These are the first five instalments of the story. It is not complete with just this set. The tale itself is great fun. It contains light BDSM elements, including bondage. Some of the encounters have dubious consent (such as waking up bound), but there is no harsh cruelty, and no one is forced. I wasn’t really sure who to root for in the story, Beatrice Primrose or Spencer Edelton. The reader doesn’t really get the whole story or any proof of what happened to Miss Primrose’s sister, just what she says happened. That said, Miss Primrose’s “abuse” of Nicholas and William was mostly monetary. The humiliation part was wholly consensual and certainly did not result in permanent physical harm to Nicholas or William. Therefore, I found it hard to come down too hard on her. Still, I thought Spencer came across as a more sympathetic character. But, regardless of who you side with, it is great fun to watch the master and mistress battle for control, and I can’t wait to see how the situation ends up. Em Brown does a great job narrating her story and really gives voice to the individual characters and their thoughts. I was given this free review copy audiobook at my request and have voluntarily left this review.

I was surprised to acknowledge that the narrator and the author are the same person and I think it's lovely .. she has a great voice.. and the book is pretty good as well ... kind of the best of both worlds ... I loved the book and the story quite much... I was given this free review copy audiobook at my request and have voluntarily left this review.

Just the absolute best story. Everything I like to listen about and more. Such a great story I will listen again and again. A keeper!! 'This book was given to me for free at my request and I provided this voluntary review'

Author kept you get engaged in the story. Good charge and good narrator. Gotta find the rest of the story.

This historical one is full of revenge entrige . It gets the listener to really get into the story. The listener gets to imagine how life was in the early 1800. How women had to watch every step they take . Come listen when a lord gets the wrong idea of a certain lady . The lord thinks the lady misled his brother sooo in order to teach her a lesson the lord leads her on a journey of pleasure of the flesh. What happens when the lord leans the truth The narrator was perfect she really knows how to act the part of the regency period

The mistress becomes the submissive, unwillingly and not without revolting. The author narrates her own story, her voice is sexy and soft, to soft in a few areas. During the narration I can her her swallow and take a deep breathe, I also heard a few background noises. I recieved this audible free at my request. I willingly post my review