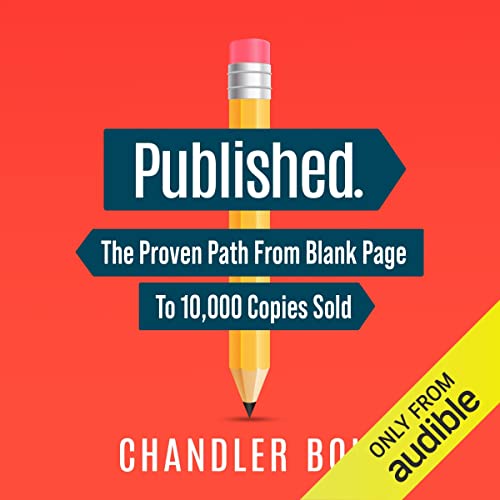 Published a step-by-step guide for first time or experienced writers to successfully write, market and publish their book.

Written to empower aspiring writers, give them a roadmap to success for authorship, and instill the idea in listeners that by implementing this advice they will give themselves an opportunity to choose unlimited possibilities for their life. Published is unique and appealing because every piece of advice given has been proven and tested by hundreds of people from different parts of the world. With Published, you will be guided through the process from where to start writing, marketing, and publishing your book.

What listeners say about Published

Thanks Chandler Bolt. I had written one adult book and one children book without the knowledge of this book before. But this book have thought me what I needed to to to punish a best selling authors book for my next books coming, I’m glad I read this book.

Chandler Bolt is a person who really cares about others. He writes from his heart and speaks from experience, not theory, as he also states in his book. This book gives me the courage, motivation and know how of how to write my first book. He makes writing a book very "do-able".

What would have made Published better?

SUMMARY:
- (All chapters, seemingly) Very thinly veiled marketing propaganda for the author's writing course gimmick called SPSS 90 (or some such nonsense... sounds like an infomercial fitness machine). Easily the most incessant bold-faced marketing I've ever encountered in an audiobook.
- (Chapter 1) Opens with story of how his first ebook--one of questionable quality, he admits--became wildly successful literally overnight. He found this out while snowboarding in Austria. He gives the usual justification for why college is dumb (liberal arts requirements). He talks about how he'd smugly undermine the authority of his business professors in front of the class because, he argues, they didn't know anything. Buy SPSS 90.
- (Chapter 2) More of the same... He had instant success despite being a terrible writer (<--his words), so anyone can do it! He goes on cherry-picking stories of others who've been wildly successful just publishing a single e-book. Buy SPSS 90.
- (Chapter 3) More of the same... everyone should do it... more cherry-picking success stories... saying anything to convince you you'll become successful no matter what (assuming you buy-in to his fool-proof writing system, SPSS 90)
-(Chapter 4) Begins describing his SPSS 90 system, which you should buy. He goes on: a) think of ideas you're"passionate about." b) Choose the idea you're most "passionate about" and think you can write about quickly. c) Freewrite for 15 minutes. d) Brainstorm content using techniques learned in elementary school <--his words. e) Write more. f) Finish ASAP. g) Publish-- don't worry about quality--just get it done. h) ???. i) Profit.


That's about as far as I could get into this audiobook. It was basically a terribly cobbled rehash of other MUCH better books.

I would have probably listened further based on "benefit of the doubt," but the author/narrator sounds like a combination a teenage mutant Ninja turtle ("Cowabunga!") and the "Dude, you're getting a dell!" kid. He basically sounds like what you'd imagine a snowboarding know-it-all college dropout would sound like.

What character would you cut from Published?

Instead of wasting time and money on this book, get "write, publish, repeat," and "write to market." Those are the best two I've come across so far.

I will return this one.

Prospective buyer, please be aware that reviews that reference the author, by name, are usually fake (see other reviews). Just sayin..

So simple. So straightforward. So encouraging!

I’ve wanted to be a writer all my life. It feels overwhelming and impossible to write all the books I have in my head. Bolt is easy to listen to, straightforward, and gives scatterbrained writers a FOCUS.

I published my first printable homeschool curriculum while listening to this book, and I have another one in the works, as well as two other books.

I actually feel like I can do this after listening to this book!!

I listened to a webinar about writing a children’s book on Self-Publishing School and the clarity, content and efficiency was apparent! I then signed up for the course and received Published as an ebook. I had to find it on Audible because I needed to read it on the go...wound up taking so many notes that I eventually printed the 202 pages. The SPS course and this book will be my guide and outline for finally finishing my book that I feel certain must be published! Thank you Chandler..well written, well read and a world changing community!

A great book fir understanding how to write/market a book.

This book was very informative with step by step guidance on how to publish a book.

If you’re looking for a quick-hitting guide for getting 90%+ of the way to publishing your first book, then this is the one for you. It’s filled with tips, tricks, and, most importantly, motivation for moving forward with your manuscript even when you don’t want to.

The reason I say 90%+ and not 100% is because there’s just so much to learn when it comes to self-publishing. There’s writing, editing, formatting, designing, launching, marketing, etc. You could honestly probably write a book on each one of these subjects. Instead, this book gives you everything you need to get started with each of these subjects and allows you to go deeper on your own terms, should you need to, down the road.

I think the best parts of the book are the author’s inspiring, “keep going” messages to aspiring self-publishers. It’s clear he knows where the potential roadblocks are in the process, and, as such, he’s quick to point them out and help budding authors get past them. He also provides some interesting pieces of wisdom that even an already self-published author like myself did not know. That I loved.

Overall, it’s a great resource — one that will get you up and running with your first book in about ninety days. I would absolutely recommend it to those looking to jump into publishing; it’s a short, affordable guide that will get you most of the way there.

-Brian Sachetta
Author of “Get Out of Your Head”

I can't wait to get started using this strategy! My book is written- so time to get to work again!

I am extremely grateful that my friend told me about “Published.” It is a life-changing book!

I found this book to be extremely well written and Chandler is a great speaker, love his energy and passion. This will definitely help me self publish my books and also the story at the end with his friend was incredibly inspirational. Worth it get the book!

Chandler makes the publishing process easy to grasp. Further, the step-by-step approach to each publishing process is easy to follow. Because I primarily purchased this book to understand marketing a book, he gives quite informative marketing strategies, especially when discussing the launch process! Thanks Chandler for your energy and simplistic style in helping new authors to feel inspired to pursue their desires for publishing!