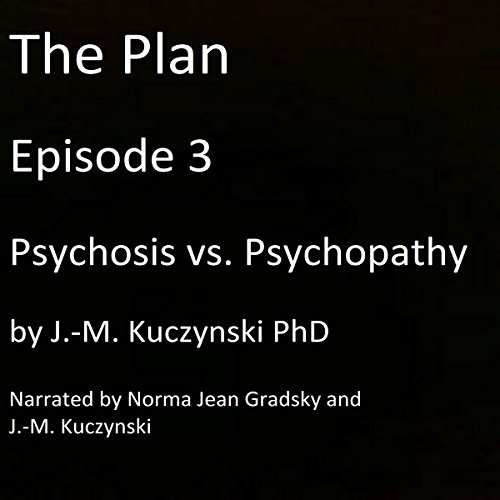 It is made clear how psychosis differs from psychopathy.

Would you consider the audio edition of Psychosis vs. Psychopathy to be better than the print version?

way, way better. this is a dialogue, meant to be heard, not read

the quick back and forth.

What about J.-M. Kuczynski and Norma Jean Gradsky ’s performance did you like?

the realistic character of their exchange.

yes, it was short, but not too short. and a lot of content.

Thought-provoking distinctions to mull over!

Where does Psychosis vs. Psychopathy rank among all the audiobooks you’ve listened to so far?

It is up there near the top, particularly in the non-fiction category.

The back-and-forth quality of the dialogue was surprisingly dynamic. I had expected the quality of the exchange to be slightly humdrum, given the topic. The surprise really arose organically as the discussion took on greater levels of analysis.

Which character – as performed by Norma Jean Gradsky and J.-M. Kuczynski – was your favorite?

Norma really gathered steam near the end of the performance, although J.M. added a flourish with an ending a bit like the "Burns and Allen Show." I would probably lean slightly toward Norma due to the strong ending.

The most fascinating move was to delve into the institutional context rather than simply trying to define psychopathy in some abstract way given a particular axiology (ethical, normative value system). When psychopathy was considered contextually and then societally, it really made me wonder about how a trait like lack of compassion can appear to be so ethically healthy or even obligatory.

Psychosis was broached at the outset and distinguished from psychopathy. It would be interesting to hear more of an explanation about why psychosis isn't more prevalent in American society and why, for instance, it's virtually absent in other cultures.

brutally accurate, wish it were longer

Where does Psychosis vs. Psychopathy rank among all the audiobooks you’ve listened to so far?

What was one of the most memorable moments of Psychosis vs. Psychopathy?

when he's talking about the neurotic guy

Have you listened to any of Norma Jean Gradsky and J.-M. Kuczynski ’s other performances before? How does this one compare?

If you could give Psychosis vs. Psychopathy a new subtitle, what would it be?

new ways in the study of psychopathology

The books feels like Ill rehearsed podcast. I don’t get why it’s presented as a conversation The questions are so stupid and forced. It feels/sounds like a scholar who is talking to robot.