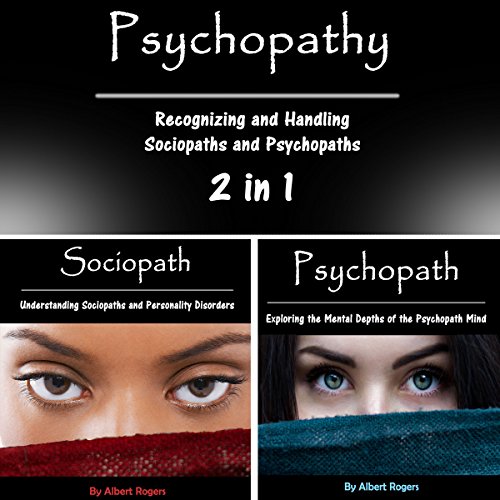 Psychopathy: Recognizing and Handling Sociopaths and Psychopaths 2 in 1

By: Albert Rogers
Narrated by: Ramon Lopez
Try for £0.00

Two books that will open your eyes to the human mind.

Book 1: Some criminals are psychopaths, and some psychopaths are criminals, but for the most part, the psychopaths among us are ordinary people with distinct traits and qualities. You might even know some yourself, or perhaps you have been manipulated by one in the past. In this book, you will learn, among others:

Book 2: Although those with personality disorders are all different, it is common for a large part of society to have at least some kind of disorder. Sociopaths have a distinct disorder that makes them different from all the other ones. In this book, you will learn:

What listeners say about Psychopathy: Recognizing and Handling Sociopaths and Psychopaths 2 in 1

If you only buy one book on this topic, buy this one. The scales will fall from your eyes if you deal with one of these people. You will have the tools to be able to evaluate their actions.

I love this book. I'm reading through for the second time as I prepare for my doctorate in Forensic Psychology with a focus on psychopathy. Much of the book is easy to follow but also detailed on the biology, DNA and other advancements that we've made in criminal science.

Content of the book is golden 5 stars for that but..

Narrator is garbage I am sorry there was a lot of words which I could not understand and I kept re-listening in hopes of understanding what he was saying but to no avail.. his pronunciation is the problem the way he says words is just impossible to understand ....
•••••• other than that content of the book is gold no problems there straight to the point no wasted time will be buying other books of the author definitely!!

Gives a good general understanding of the sort of thinking going on. Helped me to understand my experience

I found this book most helpful in that the author included his own thoughts and experiences on the matter, but he also included interviews of those patients willing to relate their thoughts and motives with their activities being examined. It's not medical level, but it goes far deeper than most popular writings on this subject.

Excellent, succinct, lucid explanation of who psychpaths are, the types of psychopaths in existence, how psychpaths think, and how to determine
the point at which a person is psychpathic. The book also has useful distinctions between the psychpathic narcissist and the psychopath, and it also explains the narcissism of the psychpath.

If your looking for a well referenced, up to date, non biased explaination of psychopathy, it doesn't get any better this

Highly recommended book for anyone in the field of criminology or criminal justice..........i would like to recommend this book greatfully

One of my favorite authors on the brain and violence. Doesn't disappoint, marvelously written and up-to-date. Fascinating

Somewhat tedious listen that contains excellent information and superb footnotes to follow for further information on each topic. A keeper for sure.

Interesting and informative. Would recommend.

Both informative and instructional for people feeling like they are dealing with people with these certain challenging characteristics. Also interesting from a biopsychosocial medical standpoint. The narration was enjoyable and easy to listen to.

Awesome book about sociopaths and Psychopaths

This is so true about sociopath i am dealing with a person who i felt was one now after reading this book i know for sure this read just exactly like the person i am dealing with including the violence it is sad but the best book i have read. Author tells the pertinent details about sociopaths ans psychopaths with practical methods for dealing with them on a personal level. Not pretty, but possibly life saving!

Accessible Guide to The Real Sociopath

She accurately points out that lots of the sociopaths in society are not in prison as any keen observer of politicians and used car sales people is well aware. Another thing that he does well is making it clear that most of those with no conscience are not serial killers or other violent criminals. She even has some case studies included that show some who merely enjoy making other people miserable in lower level ways and some who are just leeches. I'll recommend this book to my friend.. It's too long for that, and it's too rich in information. Every sentence demands consideration.

The author is uncannily knowledgeable, about many, many things. and what a writer! he is an inspired poet! the parts about the masks that the psychopath wears rang some serious bells. the way that psychology was explained in terms of natural science, and natural science in terms of metaphysics...I was impressed. Author good, narrator is also good..

There are accents and then there is mispronunciation. Listening to this often tongue-tied narrator was excruciating...sometimes I could not even understand what he was saying. My first language was Spanish and if I can’t understand the narrator, no one can. Is this some sort of joke?

whoever chose this narrator is a sociopath

i am very used to all sorts of accents from all over the world but this narrator really has terrible pronounciation which made it difficult to concentrate on this book. whoever chose him must enjoy torturing listeners! content was not great either

While there might be a lot of value in the words the quality of narration is so horrible that most people will refuse to listen to it for more than a few minutes. All other feedback is minuscule compared to the elephant in the room.
Please find a different job - English is not your forte.

interesting content, but difficult to interpret some definitions due to reader's dialect & incorrect inflection.

I enjoyed this book. It was interesting to learn who can actually be a psychopath and leader.

This book was useful as a form of getting a helicopter view of the key concepts. At times it was tricky to understand true Spanish accent of the narrator.