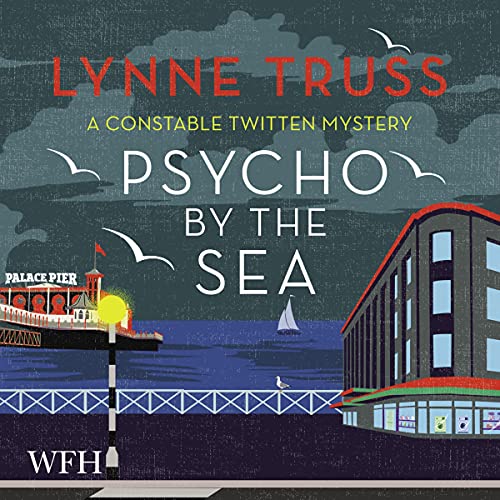 Psycho by the Sea

In the latest installment of this funny, charming and quirky series - longlisted for the acclaimed CWA Historical Dagger - our trio of redoubtable detectives are faced with the arrival in town of an escaped criminal with an unlikely penchant for boiling the heads of policemen....

It's September in Brighton, and the city is playing host to weeks of endless rain and lashings of villainy.

A trusted member of a local gang has disappeared part way through planning a huge heist, a violent criminal obsessed with boiling the heads of policemen has escaped Broadmoor and is rumoured to be headed towards the city, while at Gosling's department store, an American researcher has been found dead in the music section.

Inspector Steine has other things on his mind - since the triumphant conclusion to his last case, Steine has so many awards and invitations coming his way that he has had to take on a secretary - but Sergeant Brunswick and Constable 'Clever Clogs' Twitten are both on the case.

If only they could work out just who is behind these dastardly acts.

"Outstanding. In her ability to blend crime and farce, Truss is in a class of her own." (Publishers Weekly)

What listeners say about Psycho by the Sea

Beautifully read but you need someone older!

The story was a joy, especially to someone who grew up in Brighton in the 70s and 80s and subsequently married one of Brighton’s Finest. The reading is lovely and the voices well-judged but the reader is too young to know how to pronounce ‘Bass’ as in ‘a pint of’ or ‘toot’ which is what Mrs Groynes’ father sold!

This crime series has been an absolute joy and the narrator is so good that I don’t think I’ll ever be able to read the books without hearing the characters’ voices.

This is a very funny book, but also a historically accurate one. Obviously ridiculous in places and hilariously so, but there are many accurate highly detailed references to historical events, books, films, popular culture in general even down to foods and sweets of the 50s.

Whilst you could enjoy this book as a stand alone story, it is far more fun if you read the other three first - in order.

The characterisations are great and very entertaining. This book provides total escapism but it is not light or trashy, it's brilliantly conceived and extremely well written. Lynne Truss is an excellent writer, who has always done a lot of historical research, has a tremendous vocabulary including 50s slang and who loves her characters.

The only downside for me is the poor narration by Matt Green. He has narrated previous novels in the series but has done a rather poor job on this one. He has a narrow range and given that there are so many characters in this book, it can get confusing as he really only has four or possibly five voices. His voices are comedy 'common' (merging into comedy 'bleedin' stupid'), comedy 'posh' or comedy 'clever'. His male and female voices are pretty much interchangeable. That said, his performances of Constable Twitten and Inspector Steine, particularly Twitten, are very good and although Mrs Groynes' voice is inconsistent and lapses frequently into some of the lesser male characters' voices, it's still quite good and overall his performance is entertaining.

Whoever produced it though did a lousy job: there are so many mispronunciations, for example:
brasseries instead of brassieres
demured (not a word) instead of demurred
toot rhyming with root instead of toot as in 'old toot' pronounced as in foot
Bass (beer) as in the vocal range instead of being pronounced to rhyme with crass
Sole Bonne Femme with 'femme' pronounced fem instead of fam
etc etc. Not the narrator's fault - the producer's.

I'm still giving it 5* as it's such a funny, charming and clever story.

Truss + Green. It doesn’t get better than this.

I’m hooked on the series which is laugh out loud funny, gruesome, complex, smart, tender. My two favorite audiobook teams are now Wodehouse read by Jonathan Cecil and Lynne Truss read by Matt Green. Having grown up in the US during the sexist, racist 1950s, it’s healing to listen to this Punch and Judy version of those days.