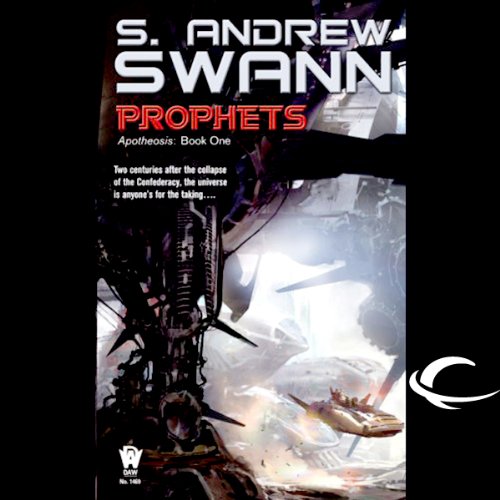 It's been nearly 200 years since the collapse of the Confederacy, the last government to claim humanity's colonies. So when signals come in revealing lost human colonies that could shift the power balance, the race is on between the Caliphate ships and a small team of scientists and mercenaries. But what awaits them all is a threat far beyond the scope of any human government.

Andrew Swann has put together a great story with great characters that is VERY reminiscent of the table top miniatures game Infinity while at the same time being very much its own, unique story. The narration by Kevin Pariseau is also excellent . . . although someone should tell him not to mimic static noise . . . especially at serious moments of dramatic tension . . . I feel I cannot maintain my willing suspension of disbelief in the face of the same sound I used to make when playing Star Wars in the back yard as a child :)

Not his earlier moreau work

Loved Swann's earlier moreau trilogy / quartet. They all very much had the hard-boiled detective, noir feel to them.

This is a foray into a more conventional type of science fiction, and lacks the pared down and direct plotting of his earlier work. Felt sprawling and unfocused to me, and the characters were less engaging. I didn't see Swann's earlier works on audible. Do yourself a favor and get them in paperback, or on a kindle. They're well worth reading.

religion is everywhere in these books

The narrator takes a while to get used to, he is like William Shatner when he talks - there are pauses at od times and speed ups at strange parts making words sound funny as if there are a set amount of words that must be said per minute and no matter what the sentence structure it is the same amount of words per minute - at times it is fast and then slow as ever, I had problems with this at first but I got used to it and you should as well, I just cant wait to get on to a better narrator - and Audible.com, let the narrator be rated separate from the book rating


Well first let me say this this is a review for all 3 books, I listened to all 3 of them back to back and they blend together because they are a single story

this starts off good and then there is religion in there, about some saint and stuff like that - I understand why things like this are needed in sci-fi books because lets face it there will always be people who believe that religion is something that they need in there life for whatever reason - this author has put religion everywhere and its almost the whole story since there is someone trying to be like god but thats not my point, what I am saying is that the main characters are all into religion also and this gets old quick

the best part comes at the end of book 3, I wont ruin anything here but there are these 2 sisters or more accurately the same person just from 10 minutes removed in time and they think alike and everything, well they decide to hook up with each other, so that makes the religion tolerable, lol

but really the story ends pretty good, my only complaint about that is that like most books when the end comes and the problem is solved or the bad guy is defeated there is little after that before the end - I would like more after the fact to see more of how things are doing but I guess thats not a good story