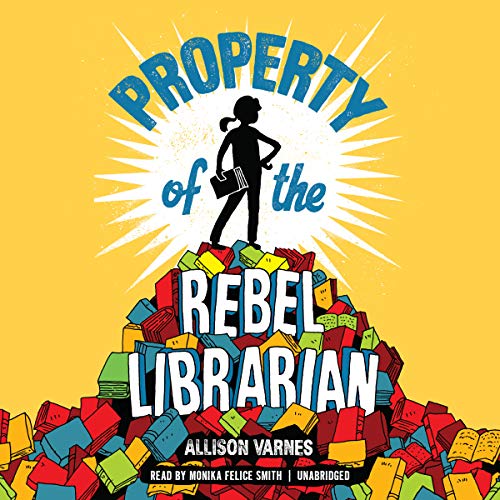 Property of the Rebel Librarian

Property of the Rebel Librarian

Celebrate the freedom to read with this timely, empowering middle-grade debut in the spirit of The View from Saturday or Frindle.

When 12-year-old June Harper's parents discover what they deem an inappropriate library book, they take strict parenting to a whole new level. And everything June loves about Dogwood Middle School unravels: Librarian Ms. Bradshaw is suspended; an author appearance is canceled; the library is gutted; and all books on the premises must have administrative approval.

But June can't give up books...and she realizes she doesn't have to when she spies a Little Free Library on her walk to school. As the rules become stricter at school and at home, June keeps turning the pages of the banned books that continue to appear in the little library. It's a delicious secret...and one she can't keep to herself. June starts a banned book library of her own in an abandoned locker at school. The risks grow alongside her library's popularity, and a movement begins at Dogwood Middle- - a movement that, if exposed, could destroy her. But if it's powerful enough, maybe it can save Ms. Bradshaw and all that she represents: the freedom to read.

Equal parts fun and empowering, this novel explores censorship, freedom of speech, and activism. For any kid who doesn't believe one person can effect change...and for all the kids who already know they can!

“In our censorious times, that battle and the extremes through which [the story] is depicted are enough to keep the pages turning. [But] it is the choices that June makes about her own life that give this novel its solidity and meaning.” (The New York Times Book Review)

“This debut novel tackles the issue of censorship in a humorous and engaging way. June is a worthy and winsome heroine who is sure to charm.... This funny and fast read could be used to fuel discussions about book banning, censorship in general, and activism.” (School Library Journal)

“An accessible introduction to the importance of the freedom to read.” (Kirkus Reviews)

A lot of heart, you can't fault the love of books!

This reminded me a lot of 'Ban this Book', which I read last year, and I did actually think I might have read this before, it seemed so familiar. But no, it's a new book.

A great concept, though hard to believe in. The most controlling parents in the world, who have pretty much run off June's elder sister with their academic demands and personal restrictions now focus on 12-year-old bookworm June. After admitting to finding a school library book a little frightening, they take extreme steps, and June's school library soon becomes the battleground for an undercover freedom campaign.

June finds her own books censored (this scene in particular had me scraping wallpaper with my nails - WHAT PARENT does this?!?!?) and her library depleted. Just wanting to read books she chooses, and finding a hidden free library, with friends at school also craving their own reading material, how can she NOT share her finds out?

I loved the talk of books, and the way students in the school start to see reading as a right and a privilege. But I could NOT buy into the parents' and school's attitudes towards 'inappropriate' literature, not in this day and age. There are even students who act in this way, it felt a little creepy. This was set in contemporary America, not the 1970s. I couldn't buy into it.

Readers of the right age will, I'm sure, lap up the rebellion, the subversion as children seek books and adults try to repress them. The librarian gets to make a pretty good speech, and June gets to see how 'friends' really should act if they are friends.

This was a good choice for an Audible read, a young-sounding narrator and straightforward story made it easy to follow and June was brought to life with passion and conviction by the reader.

This is a great homage to reading, books, librarians, and the freedom to read. My librarian heart just loves the message of this story.

This would be a great book for group discussion at schools and libraries, since it opens up the topics of censorship and right to read, which can be major issues, especially for middle school libraries in small or rural areas.

As a band geek, and also having a degree in music, I really loved all the band moments in this story. It almost feels like this story was written just for me, to align with all my loves, interests, and career paths, so that’s super fun but obviously won’t apply to all of you.

Having taught middle school for 6 years, the voice was off for me and felt much more YA than MG. The dialogue is also very mature and contained none of the uncertainty or social awkwardness of middle school interactions, which is something I happen to love about that age level. That being said, I think my 6th graders would have loved this story, because most middle grade readers like to read up. They love to read about characters who are older and more mature. They also love to read about characters who are confident and brave, which June definitely is. I suspect this book will fly off the library shelves.

There are some situations that are a bit extreme, so you do have to be willing to suspend disbelief a few times. For example:

what happens with the school library being boxed up and hauled out is pretty extreme, and most libraries and schools, even those in small and rural areas in the midwest (which is where I worked for 6 years), have policies and procedures in place for dealing with challenges to materials and censorship issues. Also, most administrators and school staff are well-educated and trained in how to handle matters such as this.

I did deal with some wild behaviors from parents, as a middle school librarian in a very conservative town, and there are some towns that do seem to employ administrators and staff who make poor choices in challenge situations, as we see it in the news from time to time. However, the level this went to before it got national media coverage shocked me.

One thing library folk do well is stand out against censorship and stand up for the right to read, and this school had an amazing librarian. In a real life situation, she would have taken action, as that is what would have been in the best interests of her learning community. Now, the reality of the situation is, that while most librarians and educators would know these things, most students aren’t going to, so it won’t interrupt their enjoyment of the story.

Honestly, it was something I tried to look past, because the extreme nature of this situation, though unlikely, really helped along the plot and theme of the story. And the reality is that most actual book challenges are very boring and not worth writing a story about, so I probably wouldn’t have wanted to read the book had it followed what is realistic in a situation like this.

Overall, this is an excellent, heartfelt story about the power and value of reading, and I truly enjoyed it. The fact that the voice is more YA might even be in this book’s favor, as it’s going to increase the appeal of the novel to some adult readers who tend to like YA but sometimes struggle with MG stories.

Also, the audiobook narration is excellent, and this would be a great book to listen to and discuss on a family road trip. If you have children, you should totally do that. This directive is middle school teacher, library media specialist, and band queen approved. You’re very welcome. ;)

Super book about real life issues of censorship and intellectual freedom. The freedom to read is essential to a complete education!

“For students, the school library represents one of America’s most cherished freedoms: the freedom to speak and hear what others have to say. Students have the right to choose what they will read, view, or hear and are expected to develop the ability to think clearly, critically, and creatively about their choices, rather than allowing others to do this for them.” – From Every Student Succeeds Act, US GOV.
Link to Intellectual Freedom Manual

I love it. perfect! I can not say enough good things about this book. if you love books and have a passion for the. read this no matter your age!!!!

This hit me hard on so many levels

Property of the Rebel Librarian was everything I wanted it to be. It was an great read and it also reminded me the power that books have and the danger of people trying to take away others knowledge. It is so inspiring and I plan on reading or re-reading so many of the wonderful banned books listed. Great debut by the author. Can’t wait to see what else she writes!