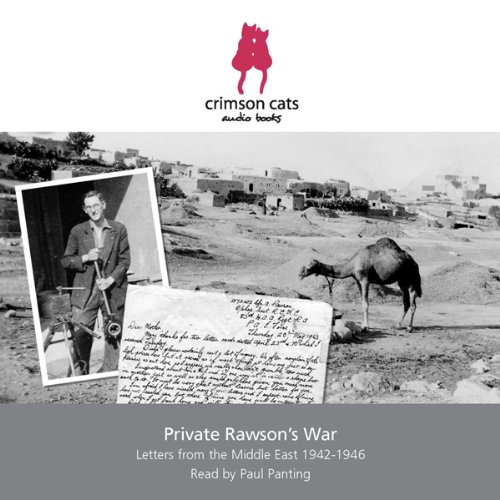 By: Tony Rawson
Narrated by: Paul Panting
Try for £0.00

A selection of letters written home by a private soldier who served in Iraq, Palestine and other parts of the Middle East during the Second World War.

Anthony Rawson was born in October 1919 and grew up in the family home in Watford. When war broke out in 1939 he was working as a gas fitter for the Watford and St. Albans Gas Company. He joined the army in June 1940 but because of his poor eyesight he was not classed as a combatant. Instead he became a fitter, later a vehicle mechanic in what was then the Royal Army Ordnance Corps and spent the next 5 years in the Middle East.

From the various bases where he was stationed in Iraq, Persia, Syria, Lebanon and finally Palestine, Tony Rawson wrote home, virtually every week, to his mother in Watford about the army, the war, the people he met, the things he did, his hopes and ambitions for his post-war life. This audio book is a selection of those letters.

Paul Panting has featured in many BBC Radio Drama plays and has recorded Daniel Tammet’s Born on a Blue Day for Book of the Week. He’s a regular reader of audio books, including The Anthony Horowitz Power of Five series for Macmillan and Paul Stewart and Chris Riddell's Barnaby Grimes series for Random House. He provides voices for many animation series including Chugginton for the BBC and Franny's Feet for Channel 5. Paul's television appearances include DCI Mumford in Silent Witness as well as roles in such series as Lewis, Holby Blue, East Enders, Casualty and The Bill.

Background Information: the introduction and historical notes are written and read by Alan Grace. Alan began his broadcasting career with the British Forces Network (BFN) Cologne in 1956. During his 38 years with the British Forces Broadcasting Service, he worked in Aden, Belize, Cyprus, Germany, Hong Kong and London. His last broadcast was from the beaches at Arromanche during the 1994 celebrations of D-Day. He is the archivist and historian for BFBS and has written three books on the subject of Forces Broadcasting.

"There is something intensely immediate about listening to individuals’ wartime experiences, especially when they concern a part of the world where so much still hangs in the balance. Private Rawson’s War: Letters from the Middle East 1942-1946 is skilfully edited, introduced by Alan Grace, archivist of the British Forces Broadcasting Service, and read with straightforward honesty by Paul Panting." (Christina Hardyment, The Sunday Times)