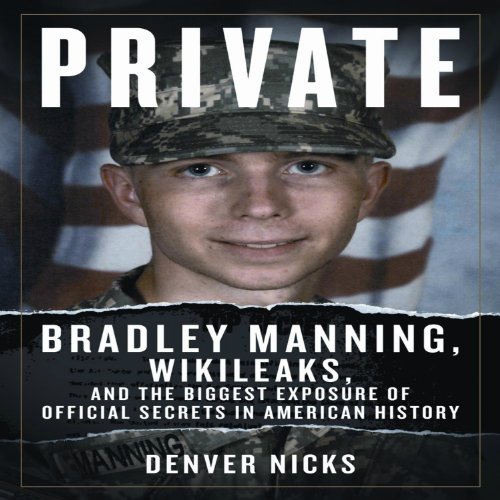 By: Denver Nicks
Narrated by: Rob Granniss
Try for £0.00

Bradley Manning perpetrated the biggest breach of military security in American history. While serving as an Army intelligence analyst, he leaked an astounding amount of classified information to WikiLeaks: classified combat videos, plus hundreds of thousands of documents from the wars in Afghanistan and Iraq and from embassies around the globe. Nearly all of WikiLeaks' headline-making releases of information have come from a single source: Bradley Manning.

The leaks affected governments the world over - the Arab Spring may have been sparked, in part, by Manning's revelations. They propelled WikiLeaks to a level of international prominence it never had before and forever changed the delicate dance between secrecy and transparency.

Bradley Manning's story is one of global significance, and yet he remains an enigma. Now, for the first time, the full truth will be told about a man who, at the age of only twenty-two, changed the world. Nicks' book paints a nuanced portrait of a man haunted by demons and driven by hope, impulsive and cocky yet idealistic enough to follow his conscience.

Relying on numerous conversations with those who know Manning best and extensive chat logs published here for the first time, Nicks gives the full story of a bright, gay young man from middle America who signs on to serve his country but finds himself serving a cause he finds far more sinister. Manning's is the morally complex tale of a soldier who took matters into his own hands in order to fulfill what he saw as a higher purpose.

What listeners say about Private: Bradley Manning, WikiLeaks, and the Biggest Exposure of Official Secrets in American History

The story of the biggest whistleblower ever.

Where does Private: Bradley Manning, WikiLeaks, and the Biggest Exposure of Official Secrets in American History rank among all the audiobooks you’ve listened to so far?

It's in the top 5 for content alone. This had a lot more information than anything the press has put out on Bradley Manning and has extensive accounts from his friends and soldiers he worked with.

What was one of the most memorable moments of Private: Bradley Manning, WikiLeaks, and the Biggest Exposure of Official Secrets in American History?

I liked the parallels drawn between the computer expertise Manning and Assange, coming up at different times in the evolution of computers and information systems. Reading about BBS's and the origins of hacking, then countering that with more recent developments in social media and hacker culture was really enthralling.

He gave a really good reading to the technical sections of the book, and wasn't doing overblown impersonations of the people involved.

Reading about Bradley's political aspirations in the context of his current trial and realizing he'll most likely never be able to pursue them.

What disappointed you about Private: Bradley Manning, WikiLeaks, and the Biggest Exposure of Official Secrets in American History?

This is basically a one sided account, from Mr. Manning's perspective, of how his conflicted sexual identity/gender identity, the testosterone fueled military mentality and feeling persecuted lead him to passively aggressively, albeit strictly forbidden by UCMJ, leak millions of classified "cables" to potential enemies.

Would you ever listen to anything by Denver Nicks again?

If Mr. Nicks at least tried to exercise some objectivity.

Who would you have cast as narrator instead of Rob Granniss?

What character would you cut from Private: Bradley Manning, WikiLeaks, and the Biggest Exposure of Official Secrets in American History?

I actually ended up with this book by accident, but thought I'd give it a go, and try to maintain an open mind. This book is so biased, and the narration extremely whinny, I don't care how open your mind is, it will soon slam the doors. This piece of work is pure garbage. I'd wager that is what written by Manning's defense team. I don't really mean to be harsh, but it looks like "harsh" it is. I'll be seeking a refund.