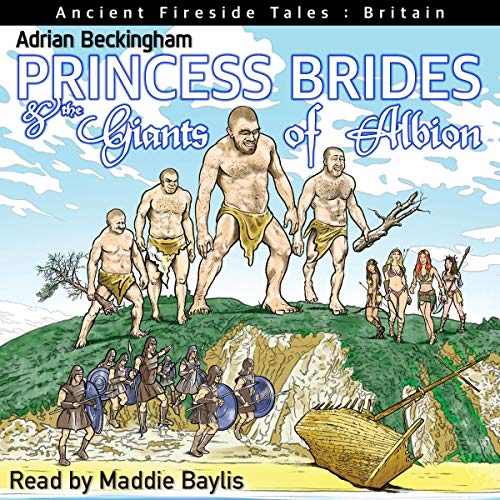 Princess Brides & the Giants of Albion

Princess Brides & the Giants of Albion launches the Ancient Fireside Tales series. These are traditional stories shared by our ancient ancestors around their firesides - as folktales for grownups and sometimes older children. The stories in this series portray humanity facing times of peril - whilst exploring human diversity and ingenuity to transform peril into opportunity, rising often phoenix-like from destitution to new heights of success.

Princess Brides & the Giants of Albion is a traditional British story from ancient times. A clan of 33 estranged sisters - all daughters to a powerful emperor - are banished from their land for a treasonous plot. Set upon a boat with neither sail nor oars, a storm eventually throws them as castaways upon the deserted shores of some uninhabited islands now named Britain.

The very first people to land upon these shores, the sisters soon become less like princesses and more like warrioresses of the wildwood, hunting with bows and spears. In a pledge for survival, the sisters form a true sisterhood - learning to love and care for one another in ways they had never understood back in the days of being princesses in a sprawling kingdom.

This is a tale of feminine quest and transformation - of treason, castaways, and the magical world of faery. We learn in this tale how Britain received its name, plus the older name by which the islands were originally known. We visit here, too, the origins of the legendary giant GogMagog and his tribe. But first, the sisters must encounter - and survive - another mysterious entity, a wildwood being who dwells within the fertile forest.

This tale of pain, passion, pleasure, and dominion has much value to carry away after the listening. It offers a rare treat for any fan of ancient legends or those seeking answers to help them better understand life's many mysteries.

What listeners say about Princess Brides & the Giants of Albion

A Captivating Tale Of Long Ago!

This audiobook is steeped in the nearly lost folklore of long ago. Adrian Beckingham has dedicated his life to reviving near-lost tales from the oral tradition back into our public arena of modern times. This latest serving does not disappoint. This is a story to hear time and again, and spread far and wide, which traces in an enchanted storytelling style an ancient mythology around the finding and naming of Britain. I'm very happy the author chose a female narrator because this story also follows a band of sisters on a transformative journey from spoilt princesses to empathic warhorses thriving in the fertile forests.

This is a wonderful story. I really appreciate the thought of Adrian Beckingham. Enjoy it!

Wonderful story of long ago rich in magic and fable. Thank you so much Adrian Beckingham.

A short tale of the early Folklore of Britain.

I listened to this as I received a free code and I am interested in Folktales and legends. This tells the story of the 32 Princesses who having been banished from their own lands come to Britain and settle the country of Albion. It is a tale of privilege and loss, growth and rehabilitation, mysteries, magic and giants! I enjoyed the story but personally found both it's style and the narration let it down. I felt as if the narrator didn't know how to pitch this and that in the end she came across as if reading for a fractious and not very bright child, but I also felt that the writing did the same so it isn't just about the narration being a bit off. I think with folk tales they have to be told as if real, and this had an underlying feel of we know this is not real, it's just a story and that somehow diminishes the tale. Having said that it was an interesting listen and none of the flaws put me off finishing it at all, in fact I was keen to hear it.

I was really surprised by this audiobook. It really made me feel like a kid again although the narrators voice was really seductive and I have been put of childbirth for life lol. If you loved fairy tales growing up then this is the book for you.

Magical mystical adventure into our histories

I've always been a fan of legends from England, like the King Arthur stories. This one is much older and just as magical. Great writing that paints pictures in my imagination, and a lively, emotive narration kept me spellbound from start to finish. I learnt a tonne of cool legendary stuff too.

This audiobook hooked me in, it felt like I was a child again at Storytime listening to a tale perfect for my more mature years.

A captivating fairy-tale for adult women full of social reflection and wisdoms of life. Thank you so much Adrian Beckingham.

I was immediately caught by the storytelling style which gives the impression you are listening around a fireside to a story of long ago. I love England and the culture so hearing this tale from their first inhabitants was truly magical.