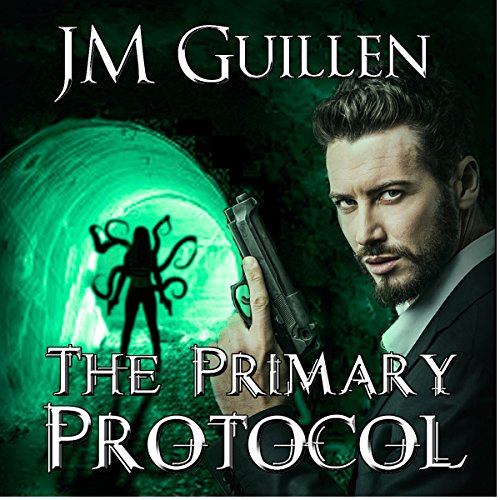 By: JM Guillen
Narrated by: Joel Richards
Try for £0.00

Eldritch abominations are invading our world. Only Michael Bishop and the Facility stand against them.

With none of his cadre at his side, Michael Bishop, Asset of the Facility, awakens in a labyrinth of forsaken darkness with faceless assassins in close pursuit. He has few memories and fewer weapons and is running for his life fighting against inhuman horrors from another world. It seems as if Asset 108 will soon be dead, all without remembering his true nature.

Soon Michael and his allies are lost in a dark, forbidden city in a world where the stars are bent and strange. He is without any of his reality-twisting technology or upgraded neuralware and is pursued by mad fanatics, worshipers of the tentacled aberrations that plot against the nations of man. Even this is not the greatest danger, however.

There are twisted plots between the abominations, schemes of which Michael and his cadre are simply pawns on a vast board. Soon they will take part in an attack that will change the very fate of this entire twisted realm, all in exchange for a whispered oath: a promise of a way home, back to the rational world.

But can the cadre trust the creatures they are bargaining with? Will the technology offered actually be capable of taking them home? And what of the mysterious lost Asset and his cryptic warnings?

In distant worlds beneath strange stars, promises are easily broken, especially ones made by inhuman foes.

What listeners say about Primary Protocol

Michael Bishop is not ordinary: he is agent 108, one of very few people charged with protecting this world's reality. Fitted inside his head with a crown which interfaces not only with all of his body and to the lattice, but with reality itself, he also has instant communication with others like himself, a cadre with whom he works when reality is disturbed or broken.
But something is seriously wrong. Michael wakes, not knowing where or who he is. And it seems that he is almost alone - and being hunted.

Following on directly from Rationality Zero, Michael and friends are trapped in a reality of nightmarish proportions, visceral, hideous - and trying to get home.Be prepared for some scenes of loathsome appearances as the Verum prepare to invade reality as we know it.

An excellent performance by narrator, Joel Richards, whose voicings of the Cadre as well as the of other entities breathes extra life into the protagonists and the terrors encountered. My thanks to the rights holder for gifting me my copy of Primary Protocol, via Audiobook Boom.
An enjoyable, if sometimes disturbing, listen, well executed in glorious technicolour.

An Entertaining Mash Up Of Multiple Genres.

“Primary Protocol” is the 2nd story that features the asset, Michael Bishop. The 1st was called “Rationality Zero.” In both stories, Bishop is an agent working to protect our reality from aliens who definitely don’t have our best interest at heart. In “Primary Protocol,” Bishop wakes up in an alien facility without his memory and must work toward solving that dilemma as well as how to get home. If you like a well-told story that features elements of mind-bending science fiction and Lovecraftian horror, then you must check out “Primary Protocol.”

If you haven’t read/listened to “Rationality Zero,” You can still enjoy “Primary Protocol,” but in the case of this series, you will be more satisfied if you start this series in order. Finally, this audio book was provided by the narrator at no cost in exchange for an honest review, courtesy of Audio Book Boom.

Take a special ops group that are hard wired with special abilities that can. E downloaded right to their mind like in matrix, special weapons that are tailored to their particular set and only usable by their program. Now set them to policing our reality like MIB. They are transported to an unknown location and face the battle of their life against one of the most invasive creatures they've ever come across. Great stuff! I was voluntarily provided this free review copy audiobook by the author, narrator, or publisher.

This book was given to me for free at my request and I provided this voluntary review.
This was a great book with everything I like in my Sci-fi. I think I'll have to get the first book in the series to become more familiar with the lingo used to describe the portal jumps and some of the tech used but why not. The narration was good as well.

This book is part Matrix,part Dresden Files, and part Lovecraftian horror. While this book is a beautiful companion to the first book in the series, Rationality Zero, I feel you could pick up this book first and catch up pretty quickly. It is well written and the imagery is beautiful.

“I was voluntarily provided this free review copy audiobook by the author, narrator, or publisher.”
This book was good! I definitely recommend it!

Another great installment in the series. I loved the first book and all of the odd monsters within the strange dimensions. This book tops that and raised the stakes. By the skin of their teeth should be the group's motto. One crazy disaster to the next, that is all they get by on. I highly recommend this book. I was voluntarily provided this review copy audiobook at no charge by the author, narrator, and/or publisher.

What other book might you compare Primary Protocol to and why?

Love the imagery Guillen creates. His Sci-Fi writing reminds me a little of the styles of Star Trek adventures and gaming genres like Portal. It took some time (probably due to not having read book 1) to get used to the nomenclature (mecha, cadre, gatekeeper, lattice, crown) but once I did, the real fun began.

I was fascinated how the author describes the use of poetry and imagery as a weapon (mental). This story was fresh and very interesting.

If you do not like the use of the 'f' word, then you'll want to stay clear of this one.

Mr. Richards did a wonderful job with the narration. His pace was perfect. It allowed me to keep up with the imagery as I was figuring out what was meant by mecha/gatekeeper/crown/lattice/... He handles both male and female parts beautifully. I enjoyed this story and I think it was because of the great presentation on the part of the narrator.

I received a free copy via audiobook boom in exchange for an unbiased review.

This book was nonstop action and the narration was excellent. The cadre learn more than they want to know about the enemy as they try to save themselves as well as the asset they are sent to rescue. It was a mind twisting, terrifying thrill ride from start to finish.