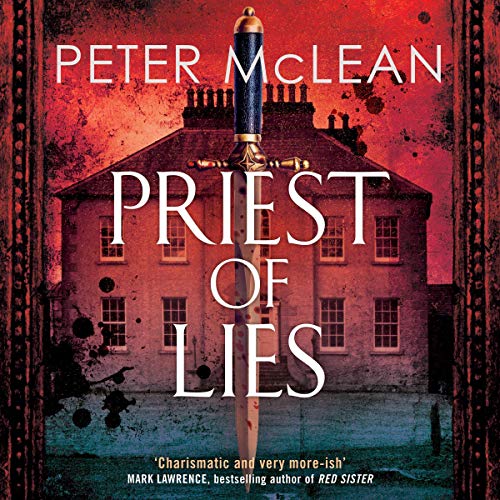 By: Peter McLean
Narrated by: David Morley Hale
Try for £0.00

Perfect for fans of Mark Lawrence and Joe Abercrombie.

'The poorer and more oppressed people are, the weaker they become - until they just refuse to take it any more. Then they will rise up, and the gods help their oppressors.'

When Tomas Piety and his Pious Men returned from the war, he just wanted to rebuild his crime empire and look after his people. But the sinister Queen's Men had different ideas, and whether he likes it or not, he's now a spy as well.

Now, half the city of Ellinburg lies in ashes, and the webs of political intrigue are stretching out from the Queen's capital to pull Tomas in. Dannsburg is calling.

In Dannsburg the nobility fight with words, not blades, but the results are every bit as bloody. In this pit of beasts, Tomas must decide once and for all whether he is truly the people's champion...or just a priest of lies. And as Tomas' power grows, the nobility had better watch their backs....

What listeners say about Priest of Lies

Priest of Lies expands on the already rich world built in Priest of Bones. Whereas before we were confined to Ellinburg, unless Tomas' memories took us back to the war, now we find ourselves travelling further afield to the city of Dannsburg where Tomas gets to partake in the thrilling world of courtly intrigue, aristocratic jibes and petty arguments. To a man where knives always cut deeper than words, having him thrust into a situation where quite the opposite is meant to be true is certainly interesting. Setting Tomas Piety loose in an aristocratic setting is akin to letting a bull loose in a china shop. Things are going to get broken.

I was curious how things would carry on after the first book and was pleasantly surprised that I didn't see certain developments coming. Always a nice thing for an author to be able to do.

One criticism I would have of the first book is that we were left just wondering about the secondary characters that made up the world of the Pious Men, whereas in Priest of Lies they are far more fleshed out. We delve deeper into characters before that were interesting but, other than a name, almost completely unknown about as far as backstory went. We are also treated to the development of well-established characters such as Billy the Boy and Jocken.

The magic system used in the world of War for the Rose Throne is fleshed out more as well and is done in such a way that is pleasantly refreshing. One of my worries about the sequel was that things were built up in such a way that I was concerned I'd go in, expectations high, and just get underwhelmed partway through. Fortunately, this did not happen.

Mclean takes the reader on a roller-coaster of emotional attachments to people you'd otherwise find yourself avoiding if you saw them in the street. He also treats you to a grittier look at the world he's building than he introduced us to before. Considering Ellinburg was by no means a cast as a pretty place in book one, that's saying something.

Tomas proves to be an interesting character with interesting motives. As a gangster mob boss you'd expect him to be driven by greed and money. Which he is. But there's also a very human side and we are treated to emotions that you'd not ordinarily associate with someone in his position.

If I was to be particularly picky, I found that, in places, the pacing could have been a tad more upbeat. But it wasn't a setback that lessened my enjoyment enough to lessen the score of this review.

The narration was spot on and I couldn't help but feel the gruff, northern accent was the perfect fit for the grim characters we have gracing the pages of the War for the Rose Throne series. Top marks all round as far as audio performance is concerned.

Looking forward to the next in the series!

I really enjoyed the first book and it's uber-violent ending but this one was better still. The narration is excellent and I'd be happy to listen to pretty much anything with David Morley Hale voicing it. I won't spoil the story but if you're looking for a dark fantasy tale with plenty of twists and turns, this might well be it.

Times Piety is back and out for more blood. This is a fantastic sequel and I can't wait to read the next.

Although the start is slow and the end is jarring (as it ought to be after all that happened during the book), I love, love and adore the series! An instant classic. Exciting, fresh, well written and leansl into themes of justice, power, loyalty and opression.

good follow up to book one. a little repetitious in part yet overall good book