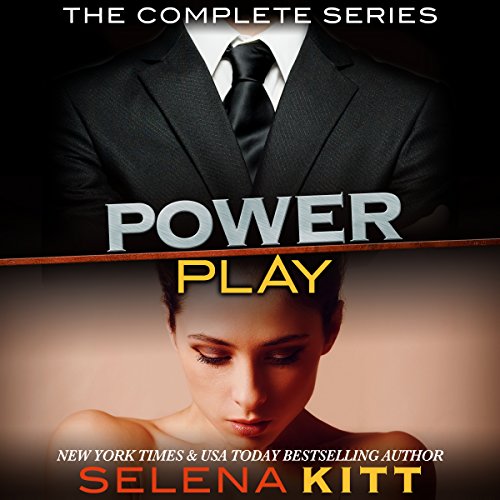 Selena Kitt's Power Play where those uber-hot alpha authority figures take full advantage of their status to strike up all sorts of sexy naughtiness with their subordinates!

What listeners say about Power Play: The Complete Series

Collection of steamy stories. Very entertaining while it last. Selena Kitt has several books on this genre

VARIOUS SHORT STORIES ALL WITH HEA

Here In Power Play we see a good few stories all slightly different with HOT HEA. So here I see that they're all sweet & enjoyable in their own right 😉

Great stories! These stories were great.

This was a great book. It had some great story lines. Was interesting, fast paced. I loved each story. They all had great taste, were hot, sweet, and had wonderful endings. Perfect little stories. Thanks for a great read. They definitely kept me entertained!

Kelsey and the Executive was a hot book. I loved how she would get these emails to do dirty things and she would because it turned her on. Later it made me LOL when she found out who it was. It was awesome. Great book.

Katie and the Dom, this was a great book, will Katie's dreams of being a sub come true? I love how she and Dom come to be and when he gives her the book and she can't tempt him. I loved how she tempted him and how he punished her. Great book.

Emily and the Priest: I thought this book was hot and made me LOL a little bit. I loved the ending and how they came to be. Great story. Will the priest fall in love with Emily and leave priesthood? WIll he commit a sin and stay a priest?

Ivy and the Cop. This story is about Ivy and her car, had troubles so she meets up with an ex who still wants her, he is the cop and he helps her. Will she fall in love with him or allow her fears to take over?

Bailey and the Professor: Wow this was interested! It was a miracle. I loved this book as they both were wonderful and helped Sunny. I loved how this story turned about, it kept me interesting, and got hot. Great story.

Jodie and the Billionaire this was a great story about Jodie and her friends, they go to Las Vegas and she plays on the craps table. She is very lucky in Dice, so lucky she snatches the 2nd most elgible bachelor Darian Cole! I loved this story was interesting fun and quite hot,

Donnie and the Maid: This was hot, it was heartbreaking at first but as soon as he got his housekeeper he was happy the kids were happy the house was clean and daddy was satisfied.

What did you love best about Power Play: The Complete Series?

I loved all the interactions between the characters.

Have you listened to any of Michael Stellman and E.V. Grove ’s other performances before? How does this one compare?

This is my first experience with audio books, but most definatly not the last.

Each story had its turning point that moved you to knowing the connection would work.

I really enjoy this series. I have them all in ereader but being able to sit back and just picture the events as someone reads it was a new, exilerating experience.

Wow could not stop listing

Where does Power Play: The Complete Series rank among all the audiobooks you’ve listened to so far?

This would defiantly have to be in my top five. I love that there was both male and female narrator.

What other book might you compare Power Play: The Complete Series to and why?

This is the first audio book that I listened to that had mulitble stores so really do not have anything to compare to but truly enjoyed and will listen to more books like this in the future.

What about Michael Stellman and E.V. Grove ’s performance did you like?

They worked really well together. You could feel a connection in every story.

Who really holds the power

I am a huge Selena Kitt Fan but this was my 1st audio book. I will be checking out more in the near future. could not stop listening once I started.

So so much better than I expected. I saw the covers of the individual stories and I was thinking this compilation would be total cheese. But seriously don’t judge. The stories are just long enough to develop the characters and get in the hotness which I find is a mark many novellas and short stories miss. But I guess that really has to do with the writing and narration. Both really great. Thoroughly enjoyed.

Love it! Great balance between the story and sex Love the narrators! Looking forward for more books of this author!

Great value, you will not be disappointed. Hard to pick just 1, I loved them all. That doesn’t happen very often. Kelsey and the Executive Kelsey never dreamed her first job out of college would be as a secretary. Oliver Pierce turns out to be a harsh taskmaster, and while her friends wonder how Kelsey got the job with such a thin resume, Kelsey doesn’t have to wonder. It becomes quite clear that her lack of experience is exactly what Oliver Pierce was looking for, and she finds herself utterly seduced, ready to be shaped and molded. Katie and the Dom Katie has a secret wish—she wants to be a submissive. Then single, sedate, librarian Katie sees an ad on Craiglist. Her friend, Lori, tells her it’s too dangerous, and she’s right. Her first Dom, Patrick, is woefully inexperienced, but thankfully, Liam interrupts his little brother’s attempts. Liam is a true Dom, and he wants Katie, perhaps even more than she wants him. Emily and the Priest Her first year away from home at Catholic college has been a disaster for shy, awkward Emily, falling in with the wrong crowd, just trying to fit in with the other girls. When Father Mark, the campus psychologist, takes her under his wing, she’s more than grateful, and under his tutelage, Emily blossoms into ripe, luscious fruit, just ready to be plucked. Ivy and the Cop Ivy’s car has broken down in the middle of the night in the middle of nowhere on the way back from a summer babysitting job, her cell phone neglectfully uncharged, and she’s never been so grateful to see flashing lights in her rear-view mirror. Bailey and the Professor Bailey’s graduate science classes are much harder than she expected them to be, and strict, young Professor Jacobs, in particular, seems out to get her, finding minute mistakes in her work, making her re-do assignments she’s already meticulously completed. When he forces her to start staying late in the lab, Bailey complains to her roommate that she’s about ready to quit school altogether, but what she doesn’t know is that her stern professor has a carnal lesson he’s waiting to teach her. Bailey is about to discover that she and Professor Jacobs share a great deal of “chemistry” together! Jodie and the Billionaire A trip to Vegas for her best friend’s bachelorette party is the perfect break from her high stress job, and it serves to be lucky for Jodie, when handsome millionaire Dorian Cole asks her to roll dice for him at the craps table. Always lucky with dice, Jodie wins him two-hundred-thousand dollars. Grateful, Dorian offers to tip her, but Jodie refuses, ready to go off with her friends to a night on the town. And that’s when Jodie gets a real life indecent proposal—an invitation to be the billionaire’s “date” for the weekend. Looking into the man’s darkly seductive eyes—how could she possibly say no? Donnie and the Maid Divorced Donnie hasn’t had it easy since his wife abandoned him for a six-figure income with the richest man in the county, taking their daughter with her. He knows he’s a bit of a daydreamer—a writer, a poet—who just can’t be bothered with real world things like preparing meals or cleaning toilets. When his twelve-year-old daughter complains that Dad’s house is “grody” and tells him, “Mom keeps threatening to call social services,” Donnie breaks down and hires a housekeeper. Sexy little Elena is a godsend, in more ways than one, descending on his house with a feather duster and a skirt so short it takes his breath away. And while Donnie struggles to keep his lust—and his growing feelings—in check, Elena finally makes it clear that he’s more than welcome to service the new maid! Its short, its hot, its insta-love at its finest. It all just works. No violence or cheating drama. HEA plus epilogue. Selena Kitt knows how to write a sexy short with lots of good story to go with the smexy. This story is performed by Michael Stellman, and E.V. Grove, who are both new to me. I don’t have any complaints, because I was completely caught up in the story. I didn’t notice any issues with the audio production. I listened at 1.00x speed.

Enjoyed all but two of the stories. Excellent narration. Nice variety to the story themes.

this is such a great collection of short stories! I was captivated through out the whole thing

What did you love best about Power Play: The Complete Series?

Collection of seven Kitt erotica stories allowed for a variety of story lines that kept your interest and looking forward to the next story. Lots of hot sexiness with beloved alpha males.

Ivy and the Cop...second chances at love and HAE! No cliffhangers.

What does Michael Stellman and E.V. Grove bring to the story that you wouldn’t experience if you just read the book?

Listening to these stories allows for a much different and welcomed experience then what you get from reading alone.

I would recommend listening to Power Play. With seven stories to listen to, you have the ability to listen to them all and re listen to your favorite ones.

Where does Power Play: The Complete Series rank among all the audiobooks you’ve listened to so far?

Definitely one I'd recommend.

What other book might you compare Power Play: The Complete Series to and why?

I can't think of anything that compares to this one.

I loved Donnie and the Maid the most. I connected with it the best.

Best reading I've heard in a long time. The male voice for the male characters helped tremendously and I like that the last book had a male narrator for it.