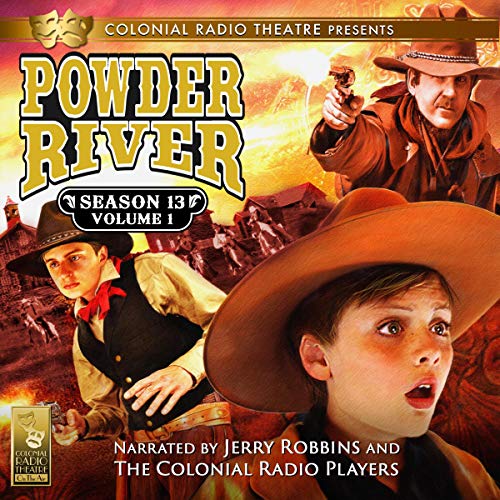 Powder River returns for a 13th season with eight episodes of action, adventure, suspense, high emotion, and tragedy that listeners have come to expect from the long-running audio drama series.

Doc wonders if he is too far behind the times when "The New Doctor" arrives in Clearmont. Esther has a strange visitor at the saloon in "Wade Cody", while Dawes decides it's time to ask Erica to marry him in "A Faded Rose". Meanwhile, Levi fears Britt has been pushed to the edge of his sanity in "That Way Madness Lies". These, and more adventures await you along the banks of the mighty Powder River.

Episodes include "The Message", "That Way Madness Lies", "A Visitor from Texas", "The Pot of Gold", "A Faded Rose", "Suppliant Requests", "Wade Cody", and "The New Doctor".

Written and directed by Jerry Robbins

That twist surprised us!

We are looooooong time fans and look forward to part 2! So glad you decided to keep going!!!!

Best Western ever. Just hate to see some good people die. Chad and Millie will be missed

Please can you let Brit and Esther get married. He’s lost so much and it would be wonderful to finally see him happy!! Hope volume 2 comes out soon!!! 🥰

Wish they would bring chad back and have britt get married. Have a big reunion and a happy wedding. Also wish dawes and erica would tie the knot.

I love this season

It was sad at first then it was really good. I recommend it to anyone

it was just great. Jerry Robbins and his crew is just awesome. Love everything about this.

Brilliant, the best yet, this series deserves to be a blockbuster movie!! Didn’t expect it to go the way it did, just blown away, Epic!!!

AWESOME. Listened to it twice already. Can't wait for volume 2. Until then time to start from the beginning again.

Mr Robbins, you have out done yourself again. Powder River is and will always be my favorite. POWDER RIVERS # 1 Fan