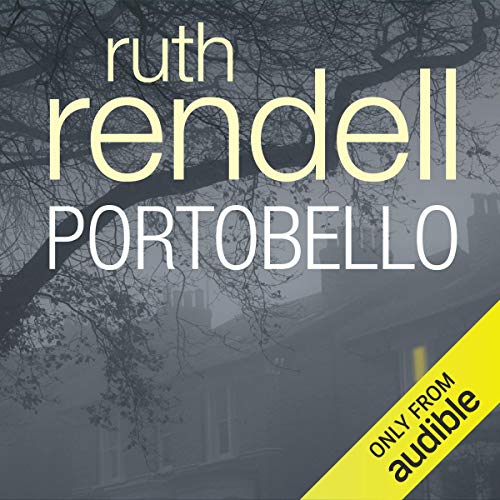 By: Ruth Rendell
Narrated by: Ric Jerrom
Try for £0.00

The Portobello area of West London has a rich personality. It also has an edge to it. There is nothing safe about Portobello.

Eugene Wren was 50, with prematurely white hair. He also had an addictive personality. But he had cut back on alcohol and had given up cigarettes - which was just as well, considering he was going out with a doctor.

On a shopping trip one day, Eugene, quite by chance, came across an envelope containing money. He picked it up. For some reason, rather than report the matter to the police, he wrote a note explaining what he had found and stuck it up on a lamp post near his house.

This note would link the lives of very different people - each with their obsessions, problems, dreams, and despairs.

What listeners say about Portobello

Ruth Rendell once again intertwines the life of the rich and the poor living in the titular trendy area of West London. Lance Platt, a young petty thief, lives with his miserly great Uncle Gib in a dilapidated house beside The Westway. Eugene resides in the plusher part of the postcode and his addictive personality begins to unravel his relationship with his GP girlfriend, Ella. Joel has a difficult time adjusting to life following his heart operation and the arrival of the mystical Mythras in his life causes the path of his destiny to change.

I really enjoyed this book and it was incredibly compelling. I doubt that many authors would be able to paint such a vivid picture of multicultural London?

The narrator, Ric Jerrom, provides a wide array of character voices. His pronunciation of the word 'plastic' as 'plaaastic' is a little odd though. Also, his portrayal of Joel's voice was so like Richmond (the goth from the Channel 4 comedy series, The IT Crowd) was especially amusing.

Not all bad! Do give it a chance!

Despite the other bad reviews I thought I would give this a try as I love ruth Rendell books. It is certainly different from her other books however I very much enjoyed it! I found it easy to listen to,I really liked the way it was read and loved the narraters voice. I would recommend it!

this was a disappointment, it was really quite tedious. I didnt care about any of the characters, and there wasnt much of a plot.

Throughly engrossing story with complex characters as usual from Ruth rendell. If you love her books it one of the best.

I bought this audio book because of the author's reputation. It turns out to be a tedious, overly long epic. The main challenge is keeping awake. Good for insomniacs.

Not the best novel

Usually I like Ruth Rendell novels but this one should not have made it to the printers never mind audible. The plot is basic and the characters mundane, it is all over the place plot wise and wtf choc Orange? What is that all about? There are better addictions than a bloody sweet.

I am glad I didn’t have to pay for this book as I would definitely be looking for a refund. Not her best work by a country.

I really enjoyed as I had recently spent a week in Notting Hill and stayed in Chepstow Villas. Wish I had read it before going away.
A gentle story but most enjoyable.
Well read too.

I do so like it when all the pieces come together in the end. A nice tidy story.

Couldn't finish this book. The narrators voices may not have helped.
I ended up not caring what happened to any of them and stopped listening.
unusual because I normally like Ruth Rendall books

Entertaining story, and a VERY good narrator. He really made the story come alive.

Ruth Rendell gave voice to people to the marginalised and criminal to make them human - and to everybody else. this story (also) covers addiction (here of chocolate). the reading performence is astonishing - no less. slighty different voices for all characters and different volume and speed in different situations