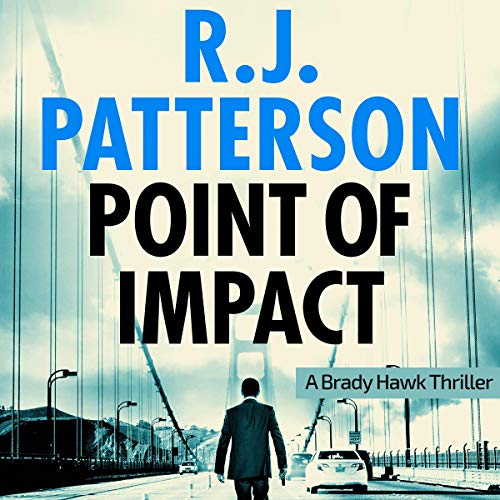 The United States' top assassin Brady Hawk learns of a new way that one of the world's most dangerous prominent terrorist organizations is infiltrating the US - and only Hawk can stop them.

When Brady Hawk learns about a sinister plot that Al Hasib has constructed to infiltrate the US, it's only a matter of time before the sleeper cell they've planted springs to life and brings death and destruction to US soil.

But Hawk, who's still reeling from the loss of a person important to him, must forge ahead and put the past behind him.

However, Hawk's plans to neutralize the threat goes awry amidst a turf struggle between the FBI and the CIA - and he must figure out a way to bring peace while apprehending the threat before millions of innocent lives are lost.

Can he emerge victorious in keeping Americans safe from the threat of ruthless terrorists who care nothing about the sanctity of life?

What listeners say about Point of Impact

Very suspenseful but who do you trust?

Brady has a mission but another one comes up. When he has to choose between trying to save Alex, Colton or stop a terrorist attack, where will his loyalty be?

I received a free code for this book.
Great story. Enjoyed the characters, and the unfolding story line of the series.

Once again Hawk is focused on completing the mission by any means necessary, which are not by standard procedures. Blunt is dead, so now he is working with General Johnson, and Firestorm. Even though Hawk doesn't trust the General. Carlton Industry has two scientists missing. He also learns there is a new terrorist organization is infiltrating the US. They have a sleeper cell, they have planted that could wipe out Americans. Only Hawk can stop them, he tries to neutralize the threat. Which goes awry and turf struggle between FBI and CIA. Then the stranger he is to meet, is it really Blunt ? Blunt saying it was all planned, he plays on having
facial reconstruction done, he wants to snuff out Al Hasib.
Given audio for my honest opinion, of which I have given.