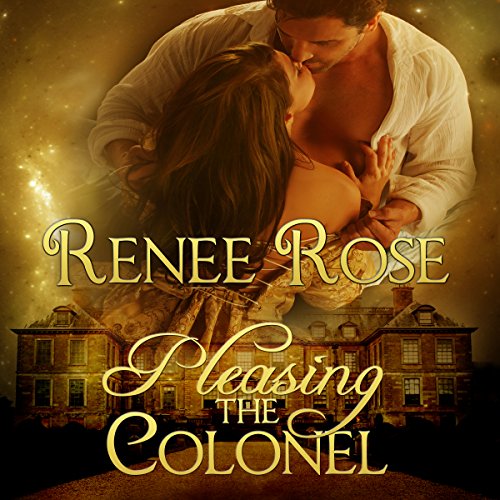 By: Renee Rose
Narrated by: Faith Alowyn Alden
Try for £0.00

Trapped in a crevice after a carriage accident, Amanda Downy is not sure whether she'll ever see the light of day again. With her tongue loosened by a fellow passenger's flask of brandy, she reveals several well-guarded secrets about her life as a governess at Colonel Watson's residence, including the fact that she falsified her references to gain her employment.

The next morning Amanda is horrified when she finds that the passenger who saved her life after the carriage crash is sitting at the breakfast table at Colonel Watson's estate, and it appears that he is the long-absent Colonel himself! Amanda is certain that she will be immediately dismissed, but the Colonel has a different sort of discipline in mind for her.

The Colonel soon learns that in spite of the deceitful manner with which she obtained the position, Miss Downy is an excellent governess and is much loved by his children. After a firm dose of the leather strap on her bare bottom, he lets her know that she may keep her position as long as she is truthful with him in the future. As time passes, though, the Colonel finds himself thinking of Amanda as he has not thought about any woman since his beloved wife passed away. Though he has no intention of ever marrying again, he cannot deny his growing need for her.

Amanda has a longstanding dislike for stiff military men, yet she warms to the Colonel, discovering that underneath his gruff exterior he is kind and generous. As she wonders if the attraction is mutual, another suitor makes his interest known. Should she accept his offer? Or should she wait to see if the Colonel will ever make his move?

What listeners say about Pleasing the Colonel

Loved the story and the narrator's versatility doing both male and female voices and accents. I really enjoyed the bloopers at the end as well, I think they're a great touch.

Fate has a warped sense of humour

Trapped beneath an upturned carriage, the young governess, Miss Downey, believed she was about to die. The liquor, one of her fellow passengers plied her with, trying to calm her nerves, also loosened her tongue, and she spoke to perhaps clear her conscious, if these were her last moments alive.
She did not die, but the very next morning, coming down for breakfast, she wished she had, as one of the two men that had been trapped with her, was her employer, who was a stern military man, who had just returned home from extended service overseas.
How was she to survive if she was dismissed?
You will enjoy how twisted fate's sense of humor (or is it Ms Rose's quirky sense of placing her characters into interesting dilemmas), either way, a very entertaining read.
I listened to the audio rendition of this book and found it both relaxing and amusing, due largely to the diversity of voices used by the narrator.

Would you listen to Pleasing the Colonel again? Why?

Yes I'll definitely listen to this again, loved the story and the narrator has a pleasing voice.

I look forward to reading and listening to more of Renee Rose's books she has never disappointed me yet. Though they could be longer I never want them to end.

I can't say enough about Renee Rose and her wonderful writing. Absolutely loved this adventure and awakening for the Colonel - loved how they interacted with each other, of course love the Alpha male and the spankings and the era that this story was based on. This narrator did a fantastic job, I even looked to see if she had done other audios, because I thought she had done such a good job. The only negative thing I can say about "Pleasing the Colonel", is it was way too short. Can't wait for the next audio from Ms. Rose.

Who ever did the voices were the best ever!!! Made me want more!!! Can’t wait for more!!!

The narrator added so much to the story..the emotion, the voices...she added so much.
The characters, including secondary provide a full story...the H and h are both very likable and you pull for their happiness. I’m not big into spanking, but it was handled ina way that was a part of the story and not a turn off at all for me.
I think I will need to explore more books buythis author and narrator...Romance package is giving me the opportunity to explore.

This was such a sweet little stroy and the performance was top notch. This actress needs to do more books.This is the second of her narrations that I have listened to. I simply lovr her and intend to listen to everything she has done. I loved the bloopers at the end too. nice touch.

Good pacing and plot development, loved the narrator, does a great British accent, and the bloopers are hilarious.

Hm, I know i wrote a review for this and its not showing. I wonder why? Hmm this is weird, but i like the actress who read for this. Hot and steamy and those spanking scenes. I cracked up during the bloopers, can i suggest more actors do this??

I throughly enjoyed this audiobook. I highly recommend it. Renee Rose’s audiobooks are are always a joy to listen to.

I made it until the colonel, on very brief acquaintance with the governess, decided to punish her for faking a reference to get the job.
No gentleman of that era would take a leather strap to an employee's bare buttocks, especially a young, innocent female.
Unrealistic, shallow, little character development.
The narration sounds like it was done inside a barrel. It goes from whispers to really loud shouts with no warning. Definitely avoid listening while driving!

This book should have a warning label.