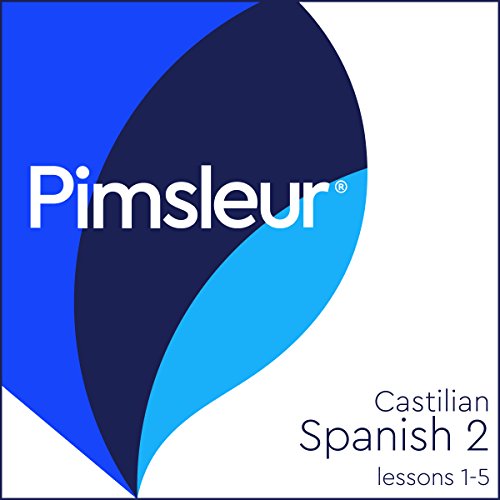 The Pimsleur® Method: the easiest, fastest way to learn a Castilian Spanish. Completely portable, easily downloadable, and lots of fun. You’ll be speaking and understanding in no time flat!

This course includes lessons 1-5 from the Castilian Spanish Level 2 program featuring 2.5 hours of language instruction. Each lesson provides 30 minutes of spoken language practice, with an introductory conversation and new vocabulary and structures. Detailed instructions enable you to understand and participate in the conversation. Practice for vocabulary introduced in previous lessons is included in each lesson. The emphasis is on pronunciation and comprehension and on learning to speak Castilian Spanish. A user’g Guide is included.

I was quite relieved that the start of the 2nd series turned out to be easier than the end of the first series! I was struggling toward the end of phase 1 and had to repeat the last few units several times before getting the hang of them. However series 2 seemed easier to get my head round.

Like in phase 1 this is a great way to learn some Spanish. New words are pronounced slowly so that you can clearly hear and understand them. Different tenses of common words are used with a lot of repetitions to make sure you remember them, although I always do each unit more than once. Hearing the Spanish speakers say the phrases helps very much with correct pronunciation. And as always the challenge of trying to come up with the correct phrase before it is said by the Spanish speaker is what makes the course really special. Every time you get it right you get a feeling of achievement.

I have currently started unit 18 of series 2 and am disappointed that I will not be able to get series 3 on Audible.

If you like Pimsleur I would also recommend Paul Noble's Spanish, which is also very good and a bit easier, and Collin's Easy learn Spanish parts 1 and 2, which has lots of useful vocabulary for short trips to Spain. I am also doing an adult education class in Spanish which is a very good compliment to these audio courses as you get to write in Spanish and get a better explanation of the grammar. Although an audio course like this one is a much cheaper way of learning some Spanish!