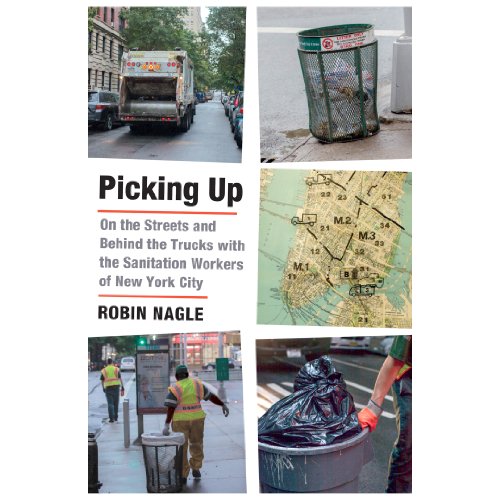 On the Streets and Behind the Trucks with the Sanitation Workers of New York City
By: Robin Nagle
Narrated by: Mary Kane
Length: 7 hrs and 5 mins
Categories: Non-fiction, Social Sciences
4 out of 5 stars 4.0 (1 rating)

America’s largest city generates garbage in torrents - 11,000 tons a day on average. But New Yorkers don’t give it much attention. They leave their trash on the curb or drop it in a litter basket, and promptly forget about it. And why not? On a schedule so regular you could almost set your watch by it, someone always comes to take it away.

But who, exactly, is that someone? And why is he - or she - so unknown?

In Picking Up, the anthropologist Robin Nagle introduces us to the men and women of New York City’s Department of Sanitation and makes clear why this small army of uniformed workers is the most important labor force on the streets. Seeking to understand every aspect of the Department’s mission, Nagle accompanied crews on their routes, questioned supervisors and commissioners, and listened to story after story about blizzards, hazardous wastes, and the insults of everyday New Yorkers. But the more time she spent with the DSNY, the more Nagle realized that observing wasn’t quite enough - so she joined the force herself. Driving the hulking trucks, she obtained an insider’s perspective on the complex kinships, arcane rules, and obscure lingo unique to the realm of sanitation workers.

Nagle chronicles New York City’s 400-year struggle with trash, and traces the city’s waste-management efforts from a time when filth overwhelmed the streets to the far more rigorous practices of today, when the Big Apple is as clean as it’s ever been.

Throughout, Nagle reveals the many unexpected ways in which sanitation workers stand between our seemingly well-ordered lives and the sea of refuse that would otherwise overwhelm us. In the process, she changes the way we understand cities - and ourselves within them.

Well-constructed story that goes deep into the details of the history and administration of sanitation in NYC. Some parts may not be for everyone (e.g. long descriptions of the byzantine bureaucracy of the DSNY) and the performer's intonation often sounds weird and robotic.

I couldn't get through this one

Something similar, just not with this narrator

Her voice was not my taste and her cadence was very distracting for me. I couldn't even hear the story, all I could hear was her talking.

What character would you cut from Picking Up?

Disappointing. I've heard/read similar books about the inside scoop on hotels and restaurants. I really looked forward to enjoying this as much. Unfortunately, I've tried every month or so to listen PAST her voice...I just can't. I give up!

It seemed like an interesting topic as I knew nothing about how sanitation operates. However, it turned out to be a snoozer. IMO, it went into too much history of sanitation for my taste.

No problem with the narration

Did Picking Up inspire you to do anything?

man up and finish the book

tougher than it looks

Never occurred to me so clearly how much the sanitation department does, 365 days a year. From taking away the garbage, to keeping the streets clean, to plowing the snow. We should applaud these folks everyday for performing an essential service that most of us wouldn't go near. Lots of great stories and tidbits about what it is like to collect the garbage, clean the streets and make the snow disappear. Similar in arc to Kitchen Confidential, but without the sex.

I would have never thought a writer would embed herself so deeply in a sanitation department. But the level of commitment shown by the writer is exceptional. and it results in a book that tells a multifaceted story about the routines of NYC sanitation workers. I gained more respect for the NYSD, even though I didn't look down on the work the way a lot of citizens do apparently. if you like learning about offbeat subject matter, this might be for you.

Not down and dirty, to flowery.

What disappointed you about Picking Up?

Robin Nagle's writing style may be ok for a romance novel, but way to ostentatious for a trash book.