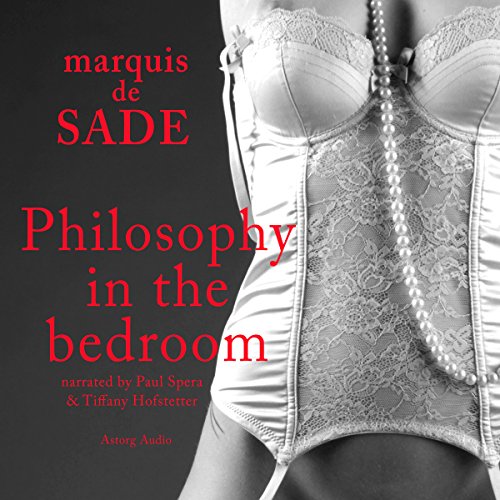 Philosophy in the Bedroom

Philosophy in the Bedroom

"Philosophy in the Bedroom" ( La philosophie dans le boudoir) was written in 1795 by the Marquis de Sade, while imprisoned in the Bastille. It is a work of erotism, laced with socio-political subversion. The main characters are libertines, who decided to give a young maiden their own brand of sex education. They explain to her that pleasure is the most important goal of all, and then proceed with affirming that she will not be able to feel "true pleasure" without pain. Then they get down to the practical lessons. This book is full of graphic descriptions, willfully obscene to the reader; it is also an argument in favour of libertinism, with a demonstration on how it is the only way of thinking reinforcing the recent French Revolution, and that if it fails to penetrate the people of France, they are in real danger of returning to a monarchic state.

What listeners say about Philosophy in the Bedroom

Do not buy... this is not the full book

As other reviewers noted, this isn't the full book... it's just the beginning of the story!!! What a scam!

Not the complete story.

Voice actors are fine and do a good job. The dialogue is interesting, but it ends abruptly. I'm not sure if this is just supposed to be a heavily edited version or a sample or something? But apart from "abridged" I don't see anything that indicates to the potential buyer that this is an incomplete telling of the work. Pretty disappointed.

Its not the full bok

Its only to chapter 7 which is only conversation 4.
Where is the rest of it?

The story was fine and the dual narration was wonderful...and then it just stopped! Like, in the middle of a story! Should have been made aware ahead of time that this is a story sampler.