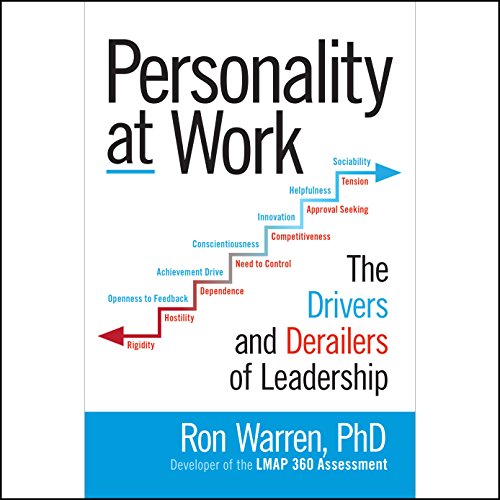 The Drivers and Derailers of Leadership
By: Ron Warren
Narrated by: Dave Clark
Length: 7 hrs and 39 mins
Categories: Business, Leadership & Management
5 out of 5 stars 5.0 (2 ratings)

An evidence-based approach to personality and leadership.

A leader's bullying and constant dismissal of his team's concerns nearly take down an entire company - and the global financial system. The US government has to provide a $182 billion bailout. A new CEO transforms a near-bankrupt auto company, and its infamously competitive culture becomes more collaborative and thrives - making it the only auto manufacturer to not take bailout funds.

These stories share a truth: Each leader's personality set the course of their company's future. We all know that IQ, education, knowledge, and technical skills are essential for professionals, but they alone are insufficient for effective leadership. Who you are as a person - your personality and character - drives leadership performance and determines who thrives and who fails.

In Personality at Work, psychologist Ron Warren lays out the key personality traits that drive high performance - and the common traits that derail it. Warren clusters closely related traits into four dimensions of behavior:

Each cluster is broken down into personality traits - 13 in all.

Personality at Work draws from research using the renowned LMAP 360 with 20,000 leaders and 250,000 360-feedback raters. An assessment used at organizations around the world, LMAP 360 is used at Harvard Business School, Yale School of Management, Underwriter Laboratories, BearingPoint, Deloitte, Teach for America, Clayton Homes, and more than 35 hospital systems throughout the United States.

Personality at Work integrates research on personality and performance, teamwork, communications, judgment, and decision making. You will learn how to:

One of the best books on ‘personality at work’ that I’ve read in the past 10 years. The core concepts are well researched and clearly presented.

My opinion may have been different if -I got a hardcopy of this book.
I do plan to listen to this book again in the future coz of all the positive reviews and may change this rating.

I completely lost interest after Jobs! Jobs! and more Jobs!
I got bored hearing Jobs this ,Jobs that, Jobs here, Jobs there, Jobs everywhere, Jobs! Jobs! Jobs!
Throw in another Jobs for fun.
Tiring job to listen to this book after a point if you got it on audible.

By my understanding, you can do without this book if you're young in your career.
If you're in a managing position this book may make more sense to you.

The author basically wants dominating personalities to get help.
If you're NOT a dominant person at work- good luck!! your'e a sitting duck- is the idea I'm getting.
There's nothing much to offer if you have a submissive personality. Get out of the way of the dominant.