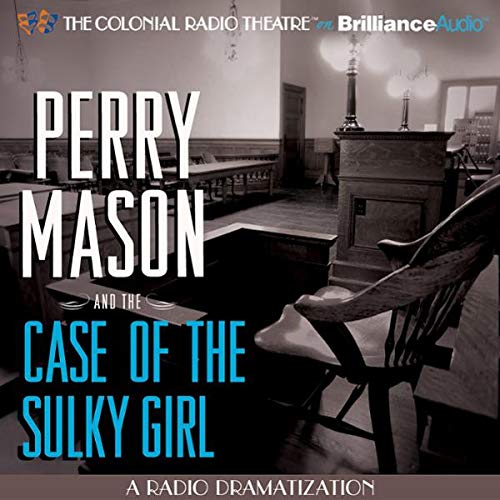 Perry Mason and the Case of the Sulky Girl

Perry Mason and the Case of the Sulky Girl

The Case of the Sulky Girl:

An impetuous niece who demands her trust fund be released comes to Perry Mason for help. But it's her boyfriend who needs defending when he is charged with murdering her controlling uncle.

©2010 Paisano Productions. ® All Rights Reserved. Based on the book by Erle Stanley Gardner. (P)2008 The Colonial Radio Theatre on the Air, Published by Brilliance Audio, Inc.

If you are looking for the great Perry Mason from the Erle Stanley Gardner books, look no more!! This is another great piece by Colonial Radio Theater. All my favorites are there-hard hitting Perry, efficient Della, and shrewd Paul. Great entertainment! I have listened to this many times and find this dramatization to be so enjoyable.

I love all the Perry Mason books and thought a dramatization was a great idea. The stories lend themselves to the spoken word. Unfortunately, it was difficult getting past the high school production values. While the actor for Perry was not too bad, Della was just plain awful. She sounded 16. And I would not be surprised to learn that for most of the other actors they had just read the script as they were recording it. I bought another Perry Mason by the same company and will let you know if it's the same for that episode, too.

Very good adaptation of this classic case, which was one of the first season eps in the tv series. Would recommend!

It's a classic Gardner... what more is there to say?

Which character – as performed by Jerry Robbins and The Colonial Radio Players – was your favorite?

Missing was the clever bit from the end where it is revealed why Fran wanted to get married so badly. Della says something like...

YES MORE MORE MORE Perry Mason! I would love to see The Case of the Haunted Husband, Daring Decoy, Spurious Spinster, Restless Redhead... heck, I would like to see them all!

Also... I wish someone would do enactments of the A.A. Fairs -- Donald Lam and Bertha Cool... those were pretty much made for radio broadcasts!

Get The Bad Guy Perry

This is a classic Perry Mason story. Feisty character with great appeal. The characters are like old friends.

I really like the old Perry Mason stories!
Clean language and plenty of "who done-it! The actors are the iceing on the cake.

Perry Mason stories are always good, so I won't waste my words praising this one. It's a given fact!
I liked the performance on this audio book because the story is performed by several actors. I like the radio/drama or theater/radio effect. Very enjoyable !

Reading from a Script

I have no idea who would possibly enjoy this. I love Perry Mason stories but thought this was very poorly read.

What didn’t you like about Jerry Robbins and The Colonial Radio Players ’s performance?

Performances seemed very amateurish. I could visualize the actors reading from the script. I couldn't get past that and finally had to turn off the program.