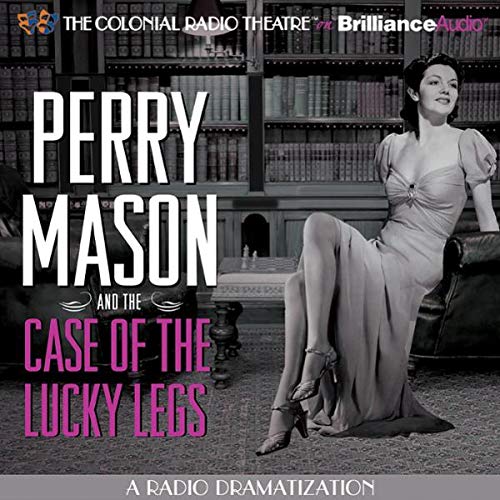 Perry Mason and the Case of the Lucky Legs

The Case of the Lucky Legs is the story of a confidence man who promoted fake beauty pageants in small California towns. Marjorie Clune was one of his winning victims, "The Girl with the Lucky Legs". She was promised a Hollywood movie contract, but the scam artist fled with the money. Marjorie fled too; left her hometown in shame to try and “prove” herself in Hollywood. Perry Mason is hired to track her down, but when the deceitful pageant promoter turns up murdered, Marjorie becomes the prime suspect in this “edge of your seat” murder mystery.

Listen to another Perry Mason mystery.
©2010 Paisano Productions. ® All Rights Reserved. Based on the book by Erle Stanley Gardner. (P)2010 The Colonial Radio Theatre on the Air. Published by Brilliance Audio, Inc.

An interesting story, lots of people in it, but you can still follow it. It would be ideal for 40/50's film noir buffs as it's quite fast paced. Overall a recommend this radio play.

I wasn't sure if I would like these radio-stories or not. I do. In fact I like them quite a bit and hope more come to audible. I've enjoyed reading a lot of the books in print and I think Jerry Robbins does great justice to Perry Mason. I always found that in the books Perry was more edgy than the TV version. In fact when you read the books you really see WHY the DA hates Perry so much.... These dramatizations are definitely show this side of Perry too.

Colonial Radio Theater did it again!!

Erle Stanley Gardner would be proud of this production!! Perry is the best. The CRT players liven up this great story. The best entertainment ever. Thanks for a great production.

As Always Good One

Another good story about Perry Mason and crew. Very relaxing pace with a few ins and outs. Enjoy!!

One of the best productions I have heard.

Loved It! All of the characters were very good. I would like to get more by the same cast.

if you're looking for something short, light and nostalgic, then this is it. Enjoy it!

Amazingly, there is NO courtroom drama in this Perry Mason, courtroom drama story. Also, the writer of this new. but not improved version of Gardner's original story, decided to change the identity of the murderer. As far as performances go, none were standout great. The actress playing Della Street had a very hard. hostile edge to her -- uncharacteristic for Della. MIA: Lt. Tragg and Gertie. Thankfully this was a cheap title so I didn't part with too much cash. If you're really interested in this title, watch the TV episode--much truer to the original.

What could Erle Stanley Gardner and M. J. Elliott have done to make this a more enjoyable book for you?

Perry Mason's claim to fame were his courtroom antics. Any production of Perry Mason must include the courtroom part. Elementary.

What about Jerry Robbins and The Colonial Radio Players ’s performance did you like?

Perry had a new. fast-talking edginess that was unique and clearly separated the actor from Mr. Burr's classic PM

Margie sounded about 10 years old... might use an actress with more ...er... maturity to her voice...Margie was an ingenue but not a child.

Absolutely a waste of money

I read the book on which this radio play is based about 15 years ago, and so I wasn't really critiquing all the short cuts they did. Still, the scene transitions are abrupt and unexpected, and the plot is better suited to a show on Nickelodeon. For example, in the first scene, Perry says he hopes the guy he's been talking about comes to see him soon. Then 2 seconds of silence later, that guy knocks on the door. It took me awhile to figure out some time had passed, and silence was the scene transition. There's lots of jarring transitions between scenes where one set of characters is talking and then a couple seconds later a completely different set is talking.

If the acting were good, maybe I could make allowances, but it's not. While the dialogue is similar to what Gardner wrote back in the 30's and 40's (It's nothing like the Perry Mason TV series with Raymond Burr.), it is delivered like bullets fired out of a machine gun. No pacing, no nuance, in short, no acting - just delivery of their lines. Coupled with the confusing production cues,this is a total failure to bring Perry Mason to audio.