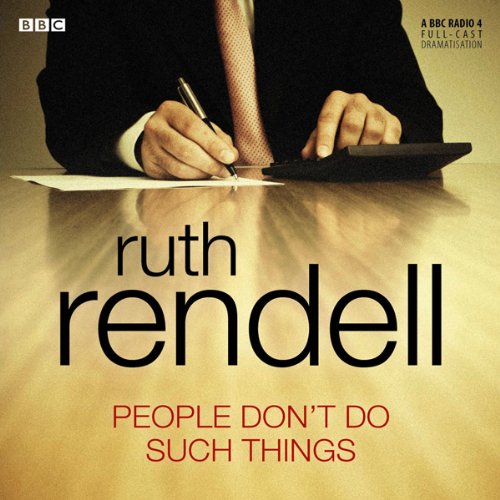 People Don't Do Such Things (Dramatised)

People Don't Do Such Things (Dramatised)

It is 1979 and hapless accountant Arthur and his wife, Gwen, have made a new friend. Flashy novelist Reeve is everything they're not - carefree, charismatic, and seemingly irresistible. At first, his friendship seems to offer an enticing window into a world beyond their cloistered suburban existence, but it doesn't take long for the relationship to slip into rather more sinister territory.

From the moment Reeve arrives on the scene, it's clear that Arthur and Gwen don't stand a chance, and it's this festering inevitability, lurking in awkward pauses and fidgety middle-class tics, that gives this play its most haunting moments.

Dramatised by Mike Walker from a short story by Ruth Rendell. Starring Reece Shearsmith as Arthur, Laura Pyper as Gwen and Michael Maloney as Reeve. Other parts are played by Rachel Atkins and David Holt. Sound Design: Steve Bond. Directed by John Dryden. A Goldhawk Production for BBC Radio 4.

if was pretty obvious from the beginning what would happen. I only listened to the end to see if I was right. I was. Not the true Ruth Rendell.

When I see Ruth Rendell's name on something, I think "deadly," not "deadly dull." Unfortunately, this BBC 4 "Afternoon Drama" is dull indeed.

In a 45-minute playlet, there's no time for nonsense, and yet this script is full of deathless dialogue: "More nibbles. More wine and twiglets." One is surrounded by enough relentless dullness in real life without having to listen to it on Radio 4.

Worse yet, the characters are entirely unlikable. Arthur, played by Reece Shearsmith, strikes one as a gormless twit, while his impressionable wife Gwen, played by Laura Pyper, isn't much better. Michael Maloney plays Reeve, who is supposed to be an irresistible charmer, but his trite dialogue fails to relay any interest, charisma, or sex appeal.

Twenty minutes in and I couldn't care less what happened to any of them.

The ending is supposed to have a twist but you can see it coming a mile away.

I doubt the original story upon which this is based could have been anywhere near this awful, but as for the dramatisation, it could scarcely be worse.