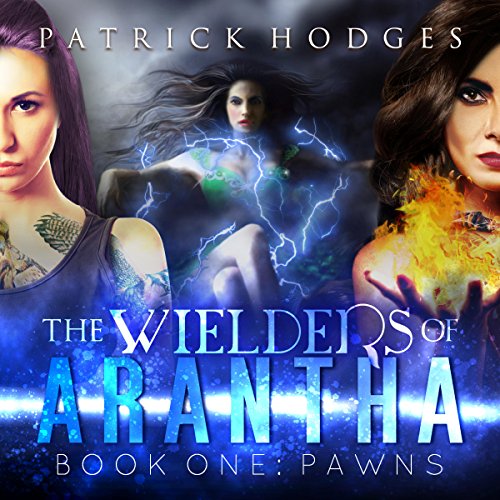 Seven hundred years in the future, the Jegg - a powerful alien race - invade Earth, wiping out half of the Terran Confederation.

In a hidden base under the Sahara Desert, a team of scientists works to mount a resistance against the invaders. Their plan is to fit an Earth ship with Jegg folding-space technology and travel to the other side of the galaxy to find a mysterious energy source...one that could help them defeat the Jegg.

But just before departure, catastrophe strikes. Only two of the crew survive and make it to their destination: the team leader's wife, Maeve, and her teenage son, Davin. What they find on the distant planet will forever change both the future of their family and their planet, as they enter a race against time...and against impossible odds.

What listeners say about Pawns

I was drawn into this story from very first page. As this story grew and developed I fell in love with all of the characters. Patrick's descriptions were so on point that I could see all of them with my mind's eye, and Rebecca's narration was spot-on. Her performance helped me envision the characters with the many talented voices she created. The genius behind the development of this story left me craving for more. I cannot wait for the release of book two in audiobook format!

I would recommend this book to anyone who loves either traditional high fantasy or sci-fi. the world building is beautiful and the text is exceptionally well written. The characters are well developed and stand out while drawing the reader in.

The characters and the world were the best part of this book, which says a lot. It was clearly well thought out and planned. There was nothing about the rules of magic or science in this universe that confused me. It all fit together well and in fact, I enjoyed the reveals and how everything pieced together.

Which character – as performed by Rebecca McKernan – was your favorite?

Embrace your destiny with the wielders of Arantha!

The reason I couldn't give this book five stars was because it's labeled as Young Adult and though there are YA characters in the book, this was most definitely an adult book that focused on adult issues for the majority of the time. Not that teens can't or won't enjoy it, but those picking it up thinking it's YA may be confused. Also, my one pet peeve was the cliffhanger. I wanted a complete story arc in one book though I can see that this is meant to be an epic series.

The concept is nice, sci-tech in a medieval fantasy magic world. but the execution was just poor. the planning taken to go to another world to look for a new power sources seems like it was listed on a paper napkin and someone said "yeah that should be good enough". Their military trained character doesnt have a head for the military and the planners just assumed everything would go perfectly without any contingency plans or gear. poor poor poor