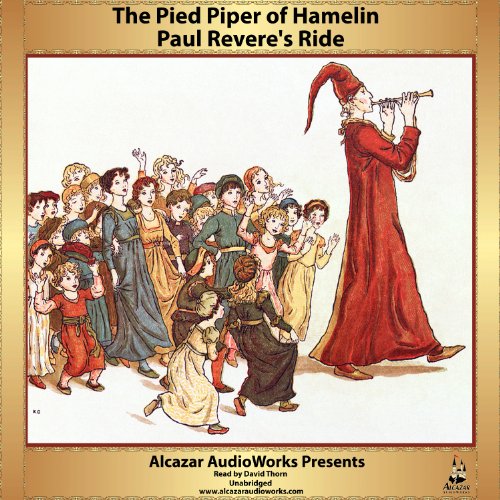 Paul Revere's Ride and The Pied Piper of Hamlin

Paul Revere's Ride and The Pied Piper of Hamlin

Old poems of exciting events for the children in all of us.

Paul Revere's exciting midnight ride to warn all the neighbors in the countryside that the British were coming ... one light if by land and two if by sea.

And The Pied Piper of Hamelin...got rid of the pesty hated rats, but when the villagers refused to pay for his services, the Pied Piper took matters into his own hands...and the villagers paid a very dear price, indeed, in the end.

Henry Wadsworth Longfellow (1807 – 1882) was a popular American poet and teacher. Longfellow was also reknown for his translations of classical texts from French, Italian and Spanish.

Longfellow's lasting legacy is his lyric poetry, "Paul Revere's Ride", "The Song of Hiawatha", and "Evangeline" are his masterpieces.

Robert Browning (1812–1889) was a British poet and playwright, famous for his monologues evoking character and scene. Married to poet Elizabeth Barrett Browning, Robert was the subject of her famous poem "How Do I Love Thee?".

Good story, but in poem format

Would you listen to Paul Revere's Ride and The Pied Piper of Hamlin again? Why?

I liked it, but my daughters enjoy stories and dramatic readings more. She didn't feel that the narrator read poetry in an interesting manner.

My daughter did like the story of Paul Revere's ride.