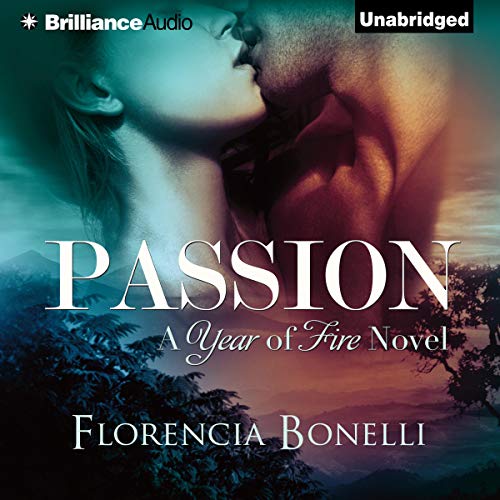 Helping suffering children of the war-torn Congo has long been a dream for pediatric surgeon Matilde Martinez. When the opportunity arises, she must leave Paris - and the recent heartache of love lost - to take it. Professional soldier Eliah Al-Saud arrives in the Congo with a different goal: to take control of a coltan mine - a mineral highly coveted by manufacturers of mobile phones - and to acquire all its profits. But Eliah's heart has another burning ambition, one much more important than money or power. He vows to win back Matilde, the love of his life - his very reason for living and breathing.

In a land ravaged by violence and cruelty, the two star-crossed lovers must overcome not only the painful secrets that separated them in Paris but the very real and immediate danger of powerful guerrilla groups. They must once again fight for their passion.

With more explosive international intrigue, heart-pounding danger, and aching romance, Passion is the second enthralling audiobook in the Year of Fire trilogy.

What listeners say about Passion

I have official declared my favorite book and series. I so wanted the third book. The narrator spectacular. The translator of the original book did a great job, extremely impressed. The author is so gifted. I would love to read all her books when they are translated to english. Passion and intrique are the best part of this book!!!!!!

Thank you audible for providing this book. Hopefully you will have the third book before to long.

Riveting, sensual, heartbreaking, and wanting to know the answers to the questions you know and those you hadn't thought to ask.

One of the best series I've listened to. Great love story plot and action. Love it

Very good book with some drawbacks

Matilde needs more backbone. Her behaviour does not make sense for someone with such a courageous cause, with selfless passion for the sick and less fortunate. Her frailty and frequency of emotional breakdowns conflicts with her brave and altruistic driven nature. The author could have better developed Matilde's maturity and emotional growth to make the character more likable and realistic.

Passion is the 2nd installment in the Year of Fire trilogy so you must read Obsession first. This "chapter" continues the love story between Eliah and Matilde after she leaves him for the Congo. Whereas Obsession depicts the intense and obsessive relationship between the lovers, this book carries them further away from one another and increases the angst felt by the reader. There is a bit more international intrigue between the Middle Eastern factions, and the dictators from African nations and, yes, the "Voice Box" is back. He is a crack up and lends a snicker to the story every now and then. Interludes with Matilde's father who is shipped off to the Sheik, and traitors sealing deals with Saddam Hussein, and the fight for yellow cake add historical references and gave this reader a close up of the ugly underworld of war and the insanity that drives desire for absolute power.

There is a pack of lusty dogs after Matilde in her new digs, the orphanage and hospital of the Congo. Everyone seems out to get her, kill her or woo her into his bed. Still a mercenary, and ever resourceful, Al Saud wants his love watched and protected thousands of miles away. Eliah's security detail reports all of her movements and incidents back to him and he goes through fits of jealousy and rage, finally enough that he jets out to confront her, to be with her. This book again has graphic, fairly tasteful sex, but not as much as the first. There are some encounters that are plain unbelievable, in the broom closet with Matilde left on the floor, with the stunning African queen while pics are being clicked. Hmm? Well, most of this comes back to haunt Al Suad and pushes his true love further away. How could she ever go back to a lover who cannot keep it in his pants? Inexplicably, one finds oneself still rooting for the star-crossed jealous lovers to battle their ways back to one another. A little orphan boy, Jerome, is a ray of hope and might possibly be a sticking factor for the love between Eliah and Matilde. So, we hope Al Saud can get to her before the real war breaks out and deals the final blow. Will he? Will she? We have to read #3 that I fear is not yet available.

Who would you have cast as narrator instead of Peter Berkrot?

Jennifer Ikeda perhaps. One of the weirdest glitches of this performance, is at the very outset, practically the first page: the narrator changes the pronunciation of Eliah's name. It is so disconcerting and distracting. Could the author and Mr. Berkrot not agree on this in the first book? What in the world? And, alas, Mr. Berkrot's reading still lacks so significantly in the female voice that I mark him down severely. At least one-third of the book follows Matilde's life and her experiences in the hospital, with other women, nuns, and of course the various other women in Al Saud's interactions. One would hope the narrator could develop a better voice for them. We can all hope for this in part three.

Could you see Passion being made into a movie or a TV series? Who should the stars be?

TV series would be fun as it is more of an epic story than a fleeting movie slice of life.

Good story, keeps you listening, and definitely sets up a final installment which promises a bang!