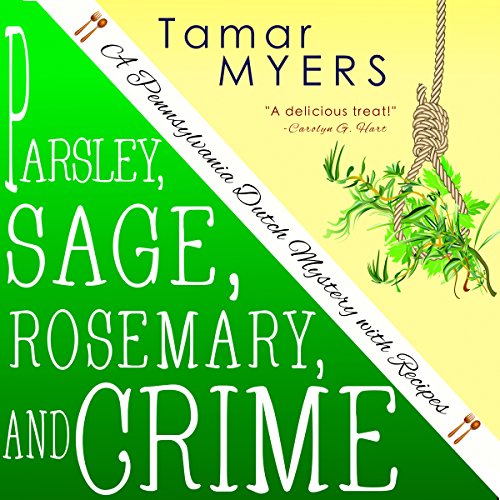 By: Tamar Myers
Narrated by: Caroline Miller
Try for £0.00

Magdalena Yoder, chaste and abstemious proprietor of the Pennsylvania Dutch Inn, agrees to let a Hollywood crew film at the inn--for an exorbitant price, of course.

But when the assistant director is found pinned to a barn post with a farming tool, dimwitted local police chief Marvin Stoltzfus fingers Magdalena as his prime suspect.

Now it's time for Magdalena to use her extraordinary Amish sleuthing skills to reveal the real killer--before another Hollywood hellion goes belly up and turns Magdalena's charming PennDutch Inn into a grisly horror flick!

What listeners say about Parsley, Sage, Rosemary and Crime

Where does Parsley, Sage, Rosemary and Crime rank among all the audiobooks you’ve listened to so far?

I have hundreds of audiobooks and this is my new favorite series. Could listen to it over and over.

magdelana, Her incites are hilarious, every when in a tight situation she can joke and wise crack.

What does Caroline Miller bring to the story that you wouldn’t experience if you just read the book?

The narrator is a natural actress. She really brings the story and characters to life.

When she finally meets Jumbo Jim,

This book was hilarious, and I so loved the narrator's personality. She really brought this quirky and fun story to life. I would def recommend to those who enjoy a cozy mystery romp! :)