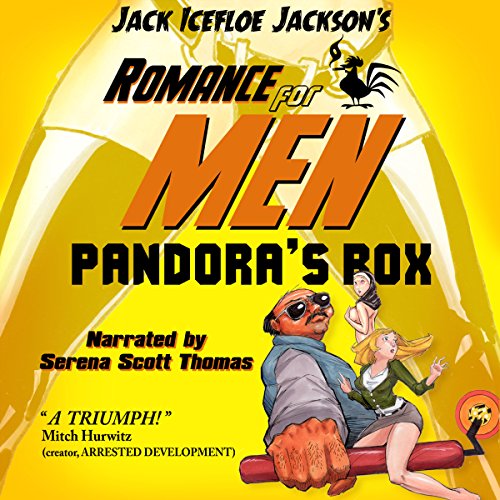 HOLLYWOOD IS RAVING ABOUT ROMANCE FOR MEN!!

DENIS LEARY: “Disgusting, profane, rabid and totally unnecessary. Which is also why I LAUGHED MY A** OFF.”

HOWIE MANDEL: “This is HYSTERICAL! It’s Fifty Shades of Funny!”

BRAD GARRETT: “HYSTERICAL! And potentially the END OF CIVILIZATION…”

SARAH MICHELLE GELLAR: “It’s one of the FUNNIEST THINGS I’VE EVER READ!”

Jack Icefloe Jackson is short, fat, bald and has a 6-inch penis -- although he only uses the first 4 because the 5th would kill a broad and the 6th would open up a rip in the fabric of time. His pleasant days in the Alaskan wilderness dynamite hunting for moose and bear are cut short when Earth is faced with an extinction-level threat.

Realizing that the end-of-the-world can only be averted by Icefloe's superior sexual prowess, President Obama calls on him to use his penis to save us all. This carnal mission will take Icefloe from The Hot Nuns of Assisi (hidden beneath the Vatican by the Pope) to The Nazi Babes of the SS in their terrible lair on Fuhrer Island...

Sick, twisted, and profane, Jack Icefloe Jackson is America’s newest hero, and ROMANCE FOR MEN: Pandora’s Box is its most hilarious new book!

What listeners say about Pandora's Box

Get past the first hour.

This starts out pretty silly and I was sure I would not finish the book, but I wanted to give it at least an hour. Once I got to chapter 16 and past the introduction and the wife and her sisters, then the book got tight and interesting. Then the story started and all the silliness became witty, lots of fun and I loved it. Anyone that is offended by foul language will not enjoy one minute of this. At first it may seem pointless, but once you see what Jackson must go through to win over Pandora, well, it turns out to be a Romance.

I also enjoyed the wicked witch, as a shoe salesman. I hope there are sequels and that she is in them. This is a good stand alone work, but is also set up for continued adventures. I want this to get popular so this YA author will write more for the adult world. I will also listen to his YA novel that is offered at audible, as he is a good writer.

I was not a fan of Go To F A Sleep, but fans of that should love this book.

It sort of reminded me of that WIZARD STORY with the witches, scarecrows, tin man, lion, etc...

At first I thought a female narrator was the wrong gender, but she does a great job and at the end of the story proves why she was chosen.

I dont know if it should sicken or impress me that there is an actual (loose) moral to this story. Either way I laughed or had a goofy smile the whole time listening. Hopefully the ridiculousness continues, just not so coarse.

I Iistened to this book over and over and I still find it funny.
I really hope there will be a sequel.

Just what every guy wants in a romance novel! Serena is the perfect choice to narrate this story. And the end...well, I don't want to spoil it for you but I think you will love it! Still LMFAO!!!

clapping like two hairy bullocks slapping ass at a PTA meeting.... not for the faint of cock.

It's so eff'ing dirty, it blows right past offensive and takes you in to absurdly awesome! I can't wait for the sequel!

What A Nice Change of Pace?

After dozens of business books, it was a nice break to stroke into the wet story of Jack Icefloe Jackson for a while. Jack Icefloe Jackson IS the superhero for short (six inches but he only uses four… not) fat guys everywhere. LOL Seriously, the author did a great job in blending comedy with a story designed for the ordinary. This book IS NOT for the uptight or easily offended reader. Be warned, the book is downright filthy, offensive and puts a new spin on stereotypes that would make a trucker blush. For us regular folk, that’s music to our ears and I found the book a very entertaining.