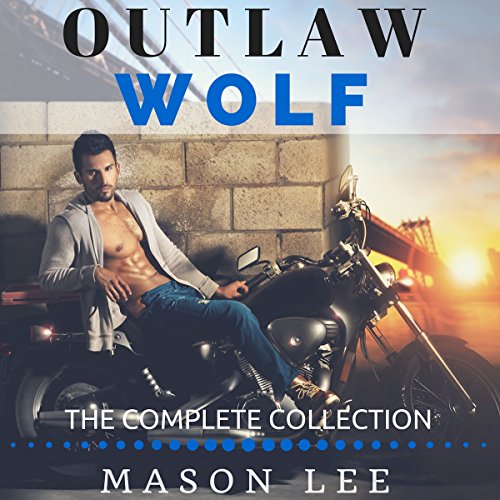 The complete collection of the Outlaw Wolf series!

"Bulldog" Williams is not your typical man. Not only is he a sexy outlaw biker, but he is also one of the most powerful werewolves to ever wear the colors of the The Beasts Motorcycle Club. He had everything a man like him could possibly want: money, power and, most of all, freedom.

This boxed set includes all five volumes. Follow Bulldog and his adventures through:

Volume One - The Beasts Club:

Bulldog had it all, so it seemed. The only thing that he didn't have was a way to fill the hole that was deep in his heart and his burning sexual desire.

That is, until he meets Steve. Now, a chance encounter has given him a choice: to risk it all and go after the one thing that he is missing or to stay with his pack and his club.

Now that he's met, and strongly desires, a human, things have gone from easy to complicated in a heartbeat.

Will he choose his club or follow his heart?

After a trip to the big city to deal with club business leaves a renewed sense of animosity between Bulldog and the leadership of the club, he is pleased to get a chance at a second date with Steve. A night of wine, Mediterranean food, and firelight conversation under the stars leads to a passionate moment that puts everything that Bulldog has been anxious about right before him.

Can he keep himself, and his wolf side, under control? Will a friend turn his back on friendship and put everything that has brought joy to Bulldog's life at risk?

As Bulldog and Steve grow closer, a storm is on the horizon. The leadership of The Beasts Club is not happy with the outlaw biker's actions and make their objections clearly known.

Now, Bulldog has a choice, a choice that he knew was inevitable, but he had hoped to avoid for as long as possible.

He must now decide on love or loyalty, and there is no room in his life for both. Which will he choose?

Just when it looks like things between Bulldog and Steve are going to be okay, they take a drastic turn when the other members of The Beasts Club decide to take action.

Secrets come out. Decisions are made. And lives will be forever altered.

Can the lovers make it through the most difficult challenge they have yet to endure?

Warning: Outlaw Wolf is an adult audiobook. It contains hot and heavy action, spicy descriptions, m/m, and steamy, sultry times. Listen at your own risk...or delight!

What listeners say about Outlaw Wolf: The Complete Collection

The idea that the main character is the victim (because he "hates fucking women," and is being told rather stermly that he will be exiled to front street if he refuses to take part) n the part where the club is running a rape train on a woman is bad enough. The part where the woman's boyfriend tells her that she's going to enjoy the gang rape more than consensual sex with him because the bikers have larger penises than he does is worse. The fact that the bf basically thinks, right before that, that his gf will be "soiled by" the bikers, so he wouldn't be able to take her soiled body back into bed again is even worse than that. Also, what's with the biker gang being bitchy little drama queens instead of just hitting each other over conflict like guys like that actually do? And what's with Bulldog even *owning* a pair of **pleat-front khakis**?!