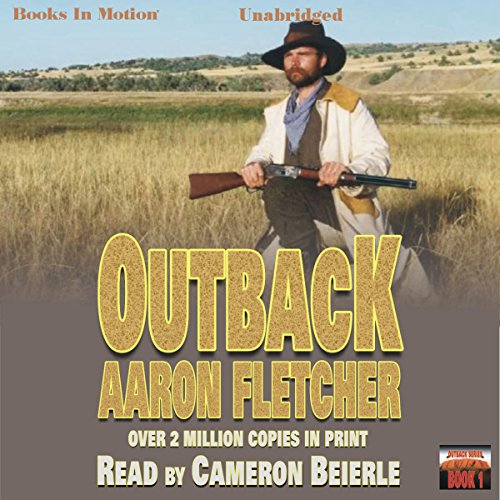 Patrick Garrity started life unwanted and unloved as the bastard son of a female convict. Barely out of his teens, he worked to make a new life for himself in the limitless back country of New South Wales. There he met Mayrah, the native girl he bought to satisfy his passions and the woman who would change his destiny and that of an entire continent. Divided by competing cultures, they were nevertheless united by their fierce love of the land -- and eventually, each other. Together they carved out an enormous empire in the great outback, and founded a new generation of Australians who would forever bear the imprint of their pride and passion.

What listeners say about Outback

Would you be willing to try another book from Aaron Fletcher? Why or why not?

Yes because I loved the book that I read years ago.

It was rather bland and blah. Parts of the story that excited me as a book, did not excite me at all listening to it.

I was going to buy the audio books for the rest of the series - I don't think so.

MY. SECOND TIME. BETTER THAN EVER

make sure to read the entire series . each book is as good or better than the first

As an Australian listening to this book, I find this narrator is really grating. He did not do his research and learn how to pronounce the names of places in the book. They are really bad. His Indigenous accents are exceptionally bad. A bit of research into the way the words should be pronounced or accents spoken would have helped.
The story is very slow to start. It had taken me 3 times to come back to listen to it, but I think that mainly the expressionless reading is boring, so when the story is slow, it makes for hard listening.

A good story that could have been more

A good story with interesting characters. The author should have broken this book into a trilogy in order to allow for more character development and to provide more time to portray the hardships endured by those that established the first sheep stations in the Outback. At the end I was left wondering what happened in the giant time gaps between parts and wising to read more about how the landscape and the work changed the characters over time.

I have listened to the story three times, and found li diificult to put away, in order to get a shorter nights sleep, each time.

I really enjoyed the story but these books should be read by an Aussie... somebody with a REAL Australian accent. It would have been so much better.

What made the experience of listening to Outback the most enjoyable?

Lots of information on how to raise sheep. Not a lot of talking between charaters. There is more than one stoy in this book.
This is a nice long book, keeps you interested. I found that it is a little confusing because of the differant stories put into the book.
Although I did like this book and others in this series.

What does Cameron Beierle bring to the story that you wouldn’t experience if you just read the book?

I believe that the reader puts in alot of emotion while reading, and that if I was just to read the book myself I would have become very bored and given up on the book.