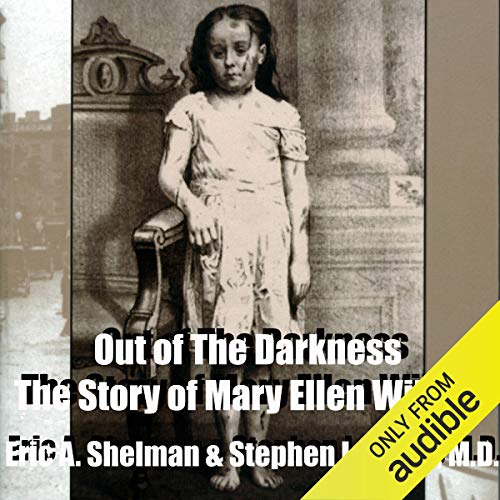 Out of the Darkness

By: Eric A. Shelman
Narrated by: Deb Thomas

In New York City, in April of 1874, a most unusual event took place. A severely abused nine-year-old girl named Mary Ellen Wilson became the first child in America to be rescued from an abusive home. She had been beaten, burned, slashed with scissors, locked in a closet, and had never been outside of her tenement home in over 7 years. Thanks to the concern and dedication of a missionary named Etta Wheeler, the child was finally saved from her cruel captors. Henry Bergh's ASPCA - yes, the American Society for the Prevention of Cruelty to Animals - was instrumental in securing her rescue. When no other agencies would become involved, the ASPCA used its power and influence to not only save Mary Ellen, but to charter the first organization of its kind to prevent cruelty to children, the NYSPCC - the New York Society for the Prevention of Cruelty to Children. This book remains the only book that tells the dramatic story of Mary Ellen's life and rescue.

What listeners say about Out of the Darkness

As someone who was rescued from an abusive home, this story was especially great. Those of us who have been saved from childhoods similar to that of Mary Ellen's owe our "second lives" (as I refer to mine) to Henry Bergh, Etta Wheeler, and those alike who dedicate their time and hearts to help those in need.

Although a very sad story, it was told really well & I found it hard to turn it off. Thoroughly recommended!

What made the experience of listening to Out of the Darkness the most enjoyable?

I almost wasn't going to listen to it. It started off a little strange to me in the beginning but I thought I better hold out and see where this goes. I am glad I did hold out. This was amazing. To learn how the ASPCC evolved from the ASPCA was especially interesting.

What was one of the most memorable moments of Out of the Darkness?

I found myself riveted when the woman lied to the mother and from that moment on this little girls life just kept taking bizarre twists and turns!

Obviously, the ending was the best part. To learn how normal her life ended up being was just as fascinating to me as the entire book itself.

a little girls love beyond the terrors of her reality.

I read that some people didn't care for the narrator. I think she did a great job. Helped me keep each character straight and I felt it gave the book a little more life and reality. Just a great book.

The story was terrifying and awful but I loved learning the history. Well written. However I feel the narration was not right. The voices done by the narrator seemed almost cartoonish. Had it not been for my interest in the history I would have turned it off.

Beyond the story of abuse lies the history of an intertwining of a love for animals and children alike. Excellent piece!

I didn't love the narration

I liked the book, but the narration was lacking. A better narrator would have made this 5 stars across the board.

She did all different voices, which I enjoyed. I wish more time was spent on the story of Mary Ellen a bit more, but it was, overall, a good book!

Yes it was easy to listen to and kept my attention

Yes, it was very easy to listen to. Some audio books can distract from the story.

I find it so hard to believe anyone would mistreat a child. Poor defenseless innocence stolen!

Humanity at it's worst and best.

If you could sum up Out of the Darkness in three words, what would they be?

Many of her voices...I was not really happy with...too much...over acting...southern voices in New York...was out of place to me. Her narrating did not stop me from listening & enjoying the book...but some character voices became irritating to me.

This was a book that I did want to listen to all in one sitting...but it took two sittings. The writer had a lot of history..which some say dragged on, but I didn't feel that way. I enjoyed all of the book.