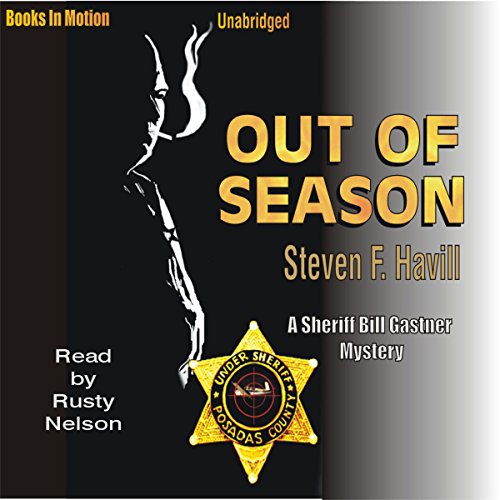 By: Steven F. Havill
Narrated by: Rusty Nelson
Try for £0.00

Sheriff Martin Holman of the Posadas County Sheriff's Department didn't like flying, much less at night, with bad weather. So why he took a plane ride over a nearby mesa under those dangerous conditions is a question as disturbing as why somebody shot the pilot dead from the ground - causing the plane to crash.

Undersheriff Bill Gastner, a 60-something warhorse just months away from retirement, now has a murder on his hands. The only possible lead is a roll of film, and with it, Gastner is determined to find out what the late Sheriff Holman was up to. Following his sharp instincts and a tenacity born of long years as a cop, he uncovers a scheme of illegal doings and nasty buried secrets. Unfortunately, it could make his biggest case his last.

"Full of bright local color and suffused with a compassionate understanding of human motivation, this intelligent, understated mystery deserves a wide and appreciative readership." ( Publishers Weekly)

What listeners say about Out of Season

What did you like most about Out of Season?

As always, Rusty Nelson's narration was wonderful. The story is good, too, but the narration brings it to life.

What was one of the most memorable moments of Out of Season?

Have you listened to any of Rusty Nelson’s other performances? How does this one compare?

I've listed to 6 of Rusty Nelson's other performances before this one. It compares equally well with the others -- he's a top-notch narrator. His voice is perfect for Posodas County, New Mexico.

I love the way Mr. Havill can paint a mental picture. I wear bifocals and the way he puts things into words describes exactly the way I feel about them. The narrator, Rusty Nelson, is a perfect match for the types of stories Mr. Havill tells. He is able to put the right inflection into the words of the Mexican characters to actually make you think someone else is speaking. I love these stories, and wish all of them were lengthy, I never get tired of hearing them, and listened to all that I've downloaded repeatedly. They are so down to earth and factual and believable. He made me go look up the word ubiquitous and knowing the meaning painted the picture better. Thanks so much, Mr. Havill.

narrator is perfect. great story. hope the next book is as good. I'm sure it is.

As always, the pairing of Steven F. Havill & Rustyl Nelson results in an exceptionally entertaining audio book. Steven keeps you wondering until the very end, and his characters are great, with personalities you can recognize. Rusty Nelson's narration lends a lot to the characters too. You feel the wide open country in his voice, and the he lis so interesting to listen to.