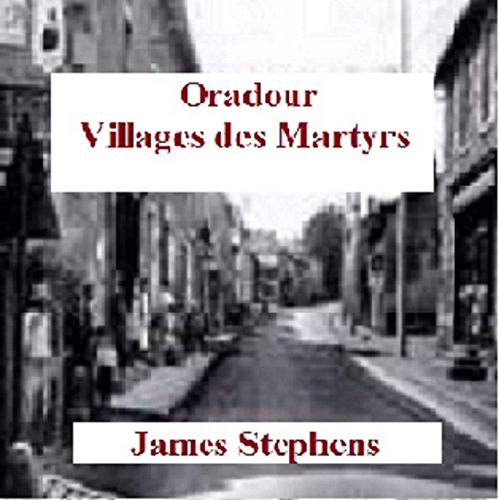 At the heart of the Haute Vienne region of France, there is a village some 10 km from Limoges. The name of this village is Oradour sur Glane. On the 10th of June, 1944, this quaint village was the scene of a barbaric massacre, at the hands of the evil Nazis. Over 150 heavily armed SS soldiers entered this peaceful village and rounded up 642 men, women, and children. After hearing false reports that they were part of the resistance movement, upon orders, these vile men systematically murdered these innocent civilians, with few survivors! Before fleeing the scene, they torched the village, in an attempt to erase the atrocities. Under orders of France's General de Gaulle, the remains of the village have been preserved, as a reminder of what happened on that fateful day.

Orodour as a real village.

The horrific story is told without over dramatisation. The lives of its inhabitants before that fateful day are presented; First Communions and Christmases, old fellows in the café, Spanish/Catalan republicans, refugees from Alsace-Lorraine, peasants and schoolchildren.
The SS account of events is included, fair enough, since de Gaulle's France tended to its own interpretation of history, but it doesn't sound very convincing!
Best of all the narrator does pronounce French and other European language properly and has a North American accent which is light and easy to hear, so there's non of that wincing I get with some narrators who seem to make a point of honour of mangling European names.

So sad, well written, and narrated

This is an amazing story and so sad knowing that its a true story. The narration is amazing. Well worth listening too.

Would you listen to Oradour: Villages des Martyrs again? Why?

Yes! The story is tragic, but told in good detail. The narrator's ability to pronounce the French words within the text added to the feel of being in France, where the story took place. Bravo!

To this day I regret not going to Oradour the last time I was in France. But this book has brought this martyred village back to life. The reader is quite excellent as he tells the story of this doomed village and its inhabitants as the German threat looms over them. To say I enjoyed this book would be incorrect. Rather, I was captivated.

If you could sum up Oradour: Villages des Martyrs in three words, what would they be?

What was one of the most memorable moments of Oradour: Villages des Martyrs?

The initial surprised reaction to the attack and destruction is touching and articulate.

What about Robert V. Gallant’s performance did you like?

Robert V. Gallant's voice has a wise and mature resonance--an expressiveness appropriate to the sad events at Oradour. His voice carries the narrative forward and holds the listener from start to finish.

Well done. I would be interested to know of future books narrated by Mr. Gallant.

I have known of the story of Oradour since I watched the first episode of World at War many years ago. It is not a story told in our history classes so I picked up this audible book to learn more. I do think the author glossed over the massacre itself. And I am sure there is more to the story to be revealed when the archives are opened long after I am gone.

However I don't believe the Nazis were going out of their way to help women out of the burning Church. I think they may have erred on the selection of which town named Oradour as well as been angry at the death of 4-5 of their comrades. I am sure the Germans felt that killing 640 to avenge 5 was great Hitlerian math.

The story was definitely worth listening to.

A true story masked at first by detail

At first I thought it a novel, with the protagonist, The Sleepwalker. I skipped ahead, and realized it was a factual account. I learned a lot.