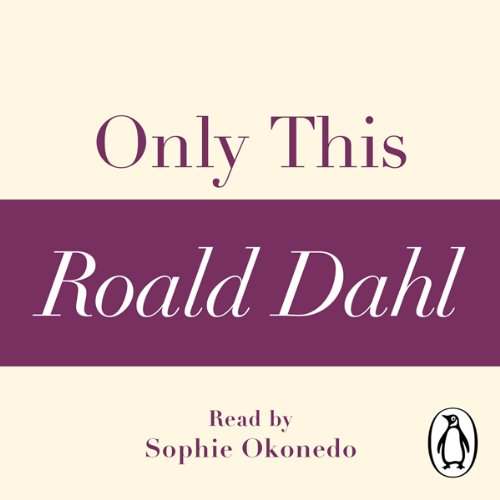 Only This (A Roald Dahl Short Story)

Only This (A Roald Dahl Short Story)

The unabridged, downloadable audiobook edition of Only This, a short, gripping story of life in wartime from Roald Dahl, the master of the shocking tale. Read by the actress Sophie Okonedo. In Only This, Roald Dahl, one of the world’s favourite authors, tells of a mother restlessly waiting for her bomber crewman son to return form a raid . . .Only This is taken from the short story collection Over to You, which includes nine other dramatic and terrifying tales of life as a wartime fighter pilot, and is drawn from Dahl’s own experiences during the Second World War.

This story is also available as a Penguin ebook. Roald Dahl, the brilliant and worldwide acclaimed author of Charlie and the Chocolate Factory, James and the Giant Peach, Matilda, and many more classics for children, also wrote scores of short stories for adults. These delightfully disturbing tales have often been filmed and were most recently the inspiration for the West End play, Roald Dahl’s Twisted Tales by Jeremy Dyson. Roald Dahl’s stories continue to make readers shiver today. Sophie Okonedo’s film work includes: Dirty Pretty Things, Hotel Rwanda, Aeon Flux, and The Secret Life of Bees. Her television work includes: Mrs Mandela, The Slap, Criminal Justice.

What listeners say about Only This (A Roald Dahl Short Story)