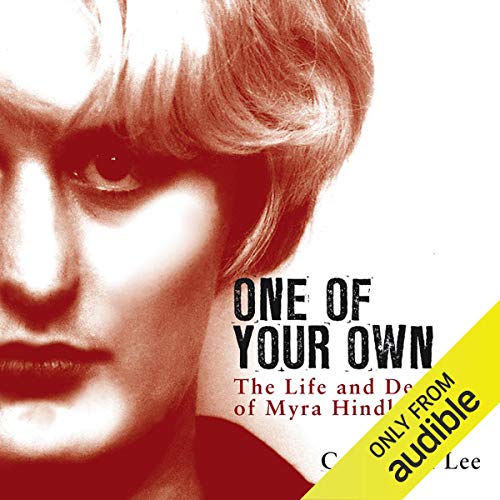 One of Your Own

One of Your Own

'Infamous, I have become disowned, but I am one of your own' - Myra Hindley, from her unpublished autobiography. On 15 November 2002, Myra Hindley, Britain's most notorious murderess, died in prison, one of the rare women whose crimes were deemed so indefensible that 'life' really did mean 'life'. But who was the woman behind the headlines? How could a seemingly normal girl grow up to commit such terrible acts? Her defenders claim she fell under Ian Brady's spell, but is this the truth? Was her insistence that she had changed, that she felt deep remorse and had reverted to the Catholicism of her childhood genuine or a calculating bid to win parole?

One of Your Own explores these questions and many others, drawing on a wide range of resources, including Hindley's own unseen writings, hundreds of recently released prison files, fresh interviews and extensive new research. Compellingly well written, this is the first in-depth study of Hindley and the challenging, definitive biography of Britain's 'most-hated woman'.

"A compelling read… a measured, humane effort to get beyond the hysteria and the horror" (The Independent)
"Scrupulously researched and clear-sighted… probably the most accurate account we have so far of how a 'perfect storm' of circumstances - psychological, moral and cultural - turned a damaged but sane young woman into the most notorious female killer of the twentieth century" (Mail on Sunday)
"Scrupulously unsensational… as good a biography of Hindley as we're likely to get" (Sunday Times)
"[A] fine book and may, indeed, be the definitive, straightforward take on a tragic, repugnant episode in the life of our post-war Britain" (The Herald)
"The most detailed, authoritative biography of Myra Hindley to date… offering a wealth of new detail" (Manchester Evening News)

The book is a harrowing insight into the life, not just of Hindley, but Brady as well. It's well researched and very interesting.

The author details the futile appeals for parole and Hindley's so called rehabilitation as well as the horrific murders.

All in all a very informative book.

I have never heard such appalling narration! Poor old Maggie Mash seems to think that she has to try and speak in the native dialect of everyone who has been interviewed in the book. So when Hindley's words are being read, we get generic North of England accent. When Brady's words are being read we get Scottish accent with a slightly husky voice. There are some really bad accents on display. There is possibly the worst attempt at an Irish accent I've ever heard!

Unfortunately this, for me at least, detracted terribly from the events in the book lending it an unwitting air of comedy. What on earth possessed the narrator to think this was a good idea is beyond me. It seemed to belittle the very serious and, at times, upsetting subject matter.

A disturbing true story well written and investigated by the author. It has some graphic details which can be upsetting though it helps you understand the state of minds of the killers ,evil or not, a chilling account well read.

It's certainly a well-researched account and could even be said to suffer from an excess of information. Quotes pepper the text to such a degree that 20 minutes can go by without a full sentence from the author being read. A page of information could have been summarised in a paragraph without any loss of accuracy. That being said it's clear that the background information has been meticulously collected and is presented in a logical narrative.

This brings us to the narration. It appears to suffer from the same striving for authentic detail as the text and as such the narrator attempts to characterise each individual with the appropriate vocal characteristics. Unfortunately she lacks the ability to do this. Every male character speaks with gruff, sinister undertones in the manner of an untrustworthy cartoon dog and the accents are quite unaccountable. One character, Dave, has a stammer which astonishingly the narrator attempts to replicate for all Dave's quotations, some of which span many pages. The result is that the canine growling is delivered in a sort of staccato regurgitation reminiscent of a concussed Dalek. The result is so infuriating it's almost impossible to bear.

Can anyone ever know the truth?

What did you like most about One of Your Own?

I liked the attention to detail, even at the start it clearly states that it endeavoured to be an accurate account. I liked how it presented Myra, good and bad.

I think having her do the voices helped to bring the characters alive.

The story was very compelling and I wanted to know what exactly would happen next. I did listen to this for sometimes more than an hour at a time, but at 18+ hours in one go, I don't think so.

I really enjoyed this book, it brought to my attention many facts about the cases that I was not previously aware. I thought it gave a reasonably balanced view of Myra, declaring her neither a beast, nor a feeble woman who was under the spell of a man.
I would recommend this to anyone with a strong stomach, as some of the descriptions of the assaults on the children are quite explicit- There is one section where the narrator reads, in character, a transcript of a tape, made by Myra and Ian during the assault of a victim; this was quite harrowing.

This is by no means a comfortable read- some of the details, particularly the transcript of the tape of Leslie Ann Downey's suffering, may give sleepless nights. However, the author stays true to her stated aim of giving the victims and their families a strong presence in the narrative and the book is really touching in parts for this reason. Hindley and Brady come across as truly revolting and the author manages to write about them as multi dimensional without ever excusing or justifying their crimes. It works pretty well as social history too though not intrusively. Quotes from the writings of the child killers musings and writings actually made me laugh out loud a couple of times- what a pair of pretentious, faux intellectuals they were- Hindley being offended by Brady's comparison of her prose style to Barbara Cartland is a gem. Narration is excellent- never too ponderous which would have made listening too harrowing...though I could have done without the cod Jamaican accent attributed to the sole black character. Recommended.

Yes, if they were interested in the Moors murder and knew something about it. Plus Myra Hindley's character becomes much clearer as the book progresses. I always thought she must have been vile to commit the crimes she did, but thought that Brady was probably the real villain. I am not so sure now, since her manipulation of so many people (some of whom, one cannot help thinking, should have know better - i.e. Lord Longford and David Astor) showed her for the heartless and self-absorbed creature that she was, without a shred of pity or compassion. Worse, she obviously expected everyone to feel as sorry for her as she was for herself over her prison incarceration.

What was one of the most memorable moments of One of Your Own?

Difficult to say, but was pretty relieved when she died in prison!

Would you be willing to try another one of Maggie Mash’s performances?

Absolutely not. I read other reviews complaining about terrible narration and to begin with I didn't think it was too bad. By half way through the book I had to grit my teeth each time I realised we were about to have another sortie into yet one more dreadful voice and accent.

It made me very angry. I am about the same age as Myra Hindley so lived through the horror everyone felt at the time when they were caught. However, as I said earlier, I was prepared to allow that she was so taken up with Brady she lost all sight of reality. I now feel, after having heard the book, that she was every bit as evil as she was made out to be. A thoroughly nasty piece of work.

I think I would probably have preferred to read the book as it seems exceedingly well-written. The narration detracts from it.

A worth while listen!

Such a sad topic but well worth the listen. Very informative and wonderfully narrated. My views on Myra have remained the same! An evil woman who knew exactly what she was doing. It was good to have a true insight into that woman and hear first hand witness accounts etc. I hope one day they find the missing boy Keith, Myra, I think did know where he was buried. An evil Woman right to the end!!!!

It's an excellent book but why did the narrator feel she had to do *every* accent mentioned in passing? Russian, French, American and some awful Mancunian ones.
There was no need to assume accents when reading the transcript of the killing of Lesley Anne Downes. A bit tasteless really.

What made the experience of listening to One of Your Own the most enjoyable?

I cant describe it as enjoyable but the story included more detail than the previous book i had read on this awful story.

The way the reader did the different voices

her way of reading and change of voice for characters

no. Far to long .Reccomended

Deadlier Than The Male

This is not a fairytale. All the events described are real and the story cannot be changed. Nothing could make this book enjoyable it is a study of depravity

What does Maggie Mash bring to the story that you wouldn’t experience if you had only read the book?

It is very difficult to come to terms with the sadness this woman, with her lover, brought to the families of these poor young people. That she hoped for forgiveness is equally unbelieveable.