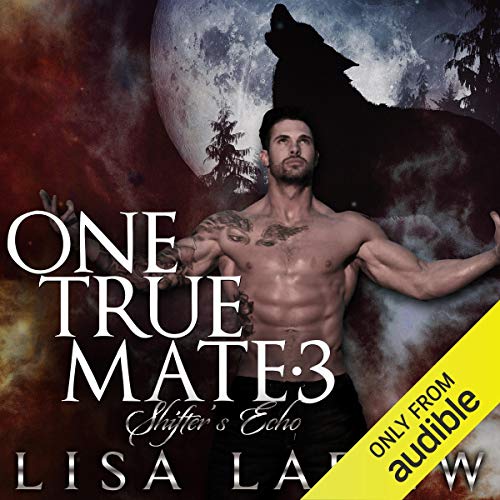 By: Lisa Ladew
Narrated by: Michael Pauley
Try for £0.00

Crew is a powerful, yet tortured, wolf shifter. With a weary heart, he seeks to avoid fulfilling a prophecy that foretells the death of his fated mate...true love lost before it has a chance to begin.

Dahlia has seen her death at the hands of a demon many times, and the vision is starting to destroy her mind. Giving up on her sanity, her only hope is that death will come well and swift.

But when she meets Crew, that all changes. For the first time in many years, she wants to see what happens after the blood spills from her fatal wound. Something in her heart says, with Crew, the last time will not be the end....

This book can be read as a standalone, no cliffie, but you will enjoy it more if you read books one and two first.

What listeners say about One True Mate 3

not as good as the first two books

Still have 2hrs left but having a hard time finding the story exciting.
May skip directly to book 4.

I read the book first, now listen didn't realise that I missed so much when I read the book.. Looking forward to the next book to listen too!

Dahlia & Crew are a great couple & they're meant to be together in the different worlds they kept stepping into. Dahlia through death & Crew through sleep & they are perfect together.
We also see how Trevor & Elle & Graham & Helen are which is really good to see how they are. Which I can't wait to see how Crew & Dahlia are as I did feel disappointed how suddenly Shifter's Echo finished

I agree with previous reviewers. At first the world hopping threw me off but once I got the hang of it, it all made sense. I do love this series but unlike others, I think all three books are exceptional. Ms. Ladew's imagination and capabilities to transfer it into writing is incredible.
In a side note.
I'm a Navy Veteran with PTSD. I emailed Ms. Ladew with a question about her books in audible form and she emailed within a few hours. I would like everyone to know what a kind woman she is.

I wish I could have skipped this book and went to the next I the series. I love the rest of the books but, this one was a struggle.

Crew should be mine ;)

Crew is my favorite guy out of the 3 so far. Lisa did a great job with his personality and humor. I loved this book and the depth of the characters. Great series so far. Can't wait for the next book. Thumbs up to the narrator too.

This is my Favorite book of the series so far and it is because of the whole changing of Dimensions or the different layers of reality.
I'm looking forward to the next chapter in the series. and the question was the hopping of the different dimension too much? that's a resounding no... I could definitely use more of the same... Perhaps a little more details in the characters of the different dimensions. I thoroughly enjoy the characters crew as well as doll Dahlia...... It just makes me wish that I was part of this but keep up the good work I love what you doing so far and I can't wait for the next chapter thank you

I am glad Crew has a mate

I liked the jumping, but it was a bit confusing. Loved the Graham and Heather made an appearance for the continuity of the series.

personally I enjoy male voices In audiobooks and I think he captured the characters well enough. love the way captures the bad guy's voice, perfectly evil.
the story I think was well-thought-out I just think there was some pieces that the author had to rush through. I say this only because there was a lot of set up but once things started moving it began getting choppy. I definitely think the story could be drawn out way longer, but that's probably why she has 10 books 😅

What a great story. The characters are all so intriguing and lovable. I really enjoyed getting to know Crue and Dahlia better. I think their story is just so fascinating. Especially with all the 'traveling' they do. I'm really enjoying this series and I'm looking forward to reading more. Well done to the author. I'm off to read book 4 now.

I loved the series up to #3 , when at section 19 the story stops . I can't get it to continue and that sucks big time. Guess I will have to do book vs audio on this book.

The different worlds and her creativity is great!!!!
I love the twists and turns in other worlds. It helps gives the stories more of a 3rd or even 4th dimension. Lisa Ladew does a great job making the transition from one world to the next so seamless, that it makes you feel like you are the one going from world to world! Crew story could not have been that easy to write because of the way she described him in the other 2 books, however I love reading his story and the sisters all coming together. So far this one is my favorite but that could change... who knows!