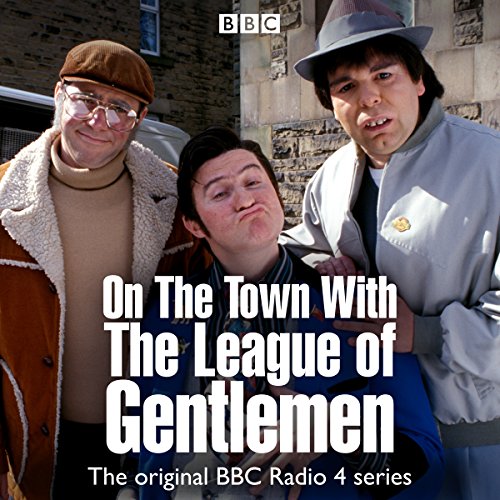 On the Town with The League of Gentlemen

On the Town with The League of Gentlemen

Welcome to Spent, an isolated and rather odd town somewhere in the North. Its singular inhabitants lead blackly comic lives, from Dr Chinnery, the lethally incompetent vet and Pauline, the monstrous Restart Officer at the Job Centre, to the hideously exacting Dentons who impose their disturbing habits and pet toads upon their visiting nephew Ben.

These and other memorable townsfolk are ferried around by Barbara, a taxi driver half way through his sex change, and served by Mr Iingleby, who brings a whole new meaning to the term 'small shopkeeper'.

Murderously funny and actuely observed, The League of Gentlemen's highly acclaimed brand of comedy shows human nature at its most extreme, and most hilarious.

Okey cokey pig in a pokey!

I Love the league more than life itself! So much fun, interesting play of the TV show in its infancy.

On The Town With The League Of Gentleman

This is a recording of TLOG's late 90s radio show derived from the BBC Radio 4 archives. Fans will no doubt notice that there are a few differences between this and the later TV version and characters such as the tiny shopkeeper, Mr Ibgleby, doesn't appear. It's subtler though and really rather excellent.

A must have for any discerning comedy fan.

Very enjoyable - I'd recommend this to any League of Gentlement fans. I have this and series 2 and 3 - I listen to them all, wait a few months to forget the jokes a bit and then listen again. I've done that several times! It's a work of genius! Only thing I'd like too is series 1 which doesn't seem to be available. Thanks to the creators of this for making me laugh many times over.

Funnier than the TV show & that's saying something

I would definitely recommend for any League fans - there's the familar stuff from the TV show (taken to the extreme) plus extra characters, such as Mr Ingleby

Loved this so much. It's slightly different to the tv series but the performances are just as good and characters just as fabulous, even though you can't see them.

They are really brilliant!!! All of them and all the stories are sooooooooo wonderful!!! Local forever ;)

No other words to describe this.
Some parts will be familiar to those who have viewed Series 1 but there are plenty of unheard/unseen characters also.
I’ve listened to this numerous times & it is a delight to devour it.

I'm a huge and oldschool fan of the TV show, this is sufficiently different to be both funny and insightful. While not as dark as the TV show, great voice acting and exceptionally tight scripts make it stand out.

Still stands as one of the funniest Radio Plays ever recorded. A sensational recording and performance.

Laugh-out-loud bizarre comedy genre of its own

If you could sum up On the Town with The League of Gentlemen in three words, what would they be?

Expect the unexpected. A neatly segued series of sketches in the village of Spent, built into a story line, which led to the dark and hilarious TV series in Royston Vaisey - you'll not want to turn it off. Prime yourself for the side- (and other-) splitting effects of the incompetently murderous vet tending to an unwilling panda, the cockatoo with tooth ache, the swollen hamster and pregnant cow. Meet gruff Barbara the trans-gender taxi-driver. Enjoy the toad-related horrors and more of Naked Thursday - and relish the quickfire timing and puns. What other comedy team could end an episode with "Alas, hoist by my own pet-toad"? Unmissable.

The living scarecrow - but you have to listen to find out it and it's keepers dark secrets...so I'll also nominate Pauline the sadistic Job Centre Manager and her pen-friends - listen in to laugh out loud...

This is like asking which member of a band is the best; one can't disentangle the cogs in this comedy machine...

So much better in digital than on original tape (!) - easy to rewind to rehearse the jokes! Do not read anywhere where you'll be slapped for obviously enjoying yourself too much.