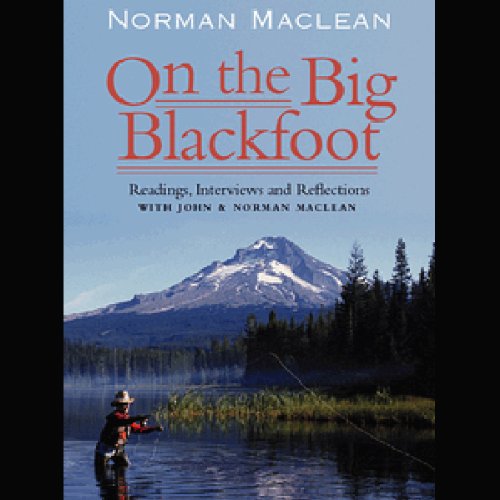 On the Big Blackfoot

Norman Maclean spent his formative years fly fishing on the Big Blackfoot River, the place that inspired the book A River Runs Through It. This moving audio retrospective is a portrait of the river's influence on Maclean's life and on his understanding of the human experience and man's connectedness to nature. Recollections by his son, John, and archival readings by and interviews with Norman Maclean are interwoven into a tapestry of family life; son remembers father, father recalls brother. Set against the gurgling sounds of the Big Blackfoot River, their voices recount a bittersweet love across the generations. It is a story sure to leave the listener, like Maclean, "haunted by waters."
Text of A River Runs Through It ©1976 by The University of Chicago Press. Archival recording published by arrangement with Jean Maclean Snyder and John N. Maclean. Narration ©1994 by John N. Maclean. Interviews with Norman Maclean ©1985 and 1992 by National Public Radio®. News reports by NPR's Alex Chadwich and Noah Adams were originally broadcast on National Public Radio's All Things Considered on November 9, 1985 and October 15, 1992 and are used with permission of National Public Radio. ©1995 High Bridge Company. ©2000 HighBridge Company.

What listeners say about On the Big Blackfoot

Norman McLean could write of rivers and fly fishing and life like no one else. A River Runs Through It is one of my favorite books, and this is a beautiful and touching sampling of some of it, interspersed with comments from his son John. Some people may be bothered by the "intermissions", but there are few sounds I love more than that of running water, and I felt it suited this work perfectly.

If you have read/watched/listened to "A River Runs Through It", then this is a great, must have addition. I think they should sell together as a set.

Why did I spend good cash for this trash? It's a testimonial to the author's father, who made a book that I did not like much. Lucky for that family, it got made into a movie...which made it famous. Now, everybody is gaga over it. This testimonial started about fly fishing, a good subject. However, the (less than 1 hour long) audio book is at least 1/3 air and music. I felt so ripped off that I put it in the category of DBF (did not finish).

"On the Big Blackfoot"

Not to discredit Norman McClean but this was a waste. I would hate to think if this were an abridged verson.