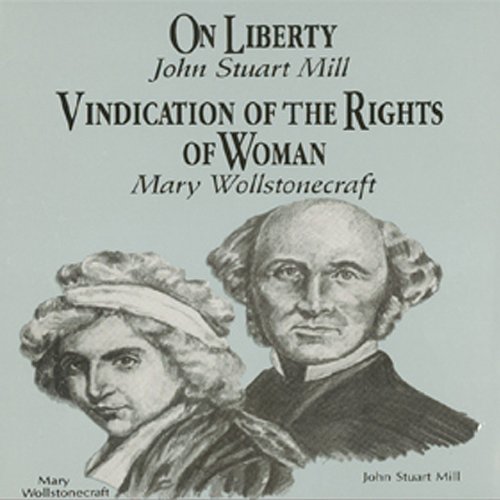 On Liberty & Vindication of the Rights of Women

In On Liberty, John Stuart Mill advocated individual liberty based on a philosophical concept called utilitarianism, or "the greatest happiness for the greater number". This intellectual tradition rejects natural rights, such as those in Jefferson's Declaration of Independence. Despite beginning with a different theoretical foundation than natural rights proponents, Mill reaches a similar conclusion, that diversity in individual thought and action ultimately benefits society.

Vindication of the Rights of Woman examines the tumultuous life of Mary Wollstonecraft and the social conditions against which she struggled. It explores her call for female independence against the backdrop of 18th-century England, the French Revolution, and the changing role of women. Mary Wollstonecraftt lived the life she advocated, defying accepted customs for female employment, marriage, and family life.

This book does provide some interesting material on Mill, some equally interesting commentary on Bentham and Wollstonecraft but the too frequent punctuation of the texts by the narrator is disruptive. The ?voice actors? give terrible performances. The ?English? accents are a cross between Dick Van Dyke and Frankenfurter from the Rocky Horror show. Victorian utilitarians did not, as fara as I?m aware, speak in strained falsetto. Especially Mill, raised a Scott. While there is some insightful commentary on the text itself, but for the most part in is overly simplistic and, frankly, stating the obvious. The book would have be saved by a complete and unadulterated reading of Mill?s text.

Absence of On Liberty

Sadly, I missed the reviews before me when I purchased the book with my credits. I was expecting a complete reading on On Liberty, but alas, what I have inadvertantly purchased is an extended foreword. This is not softened by the unfortunately overdramatised voice actors whose attempts to enthuse the texts with as much expression as possible strain the suspencion of disbelief. Anyone looking for a reading of On Liberty should seek elsewhere, because all they will find here is an extended history of the life of John Stewart Mill avaliable from any encyclopedia.