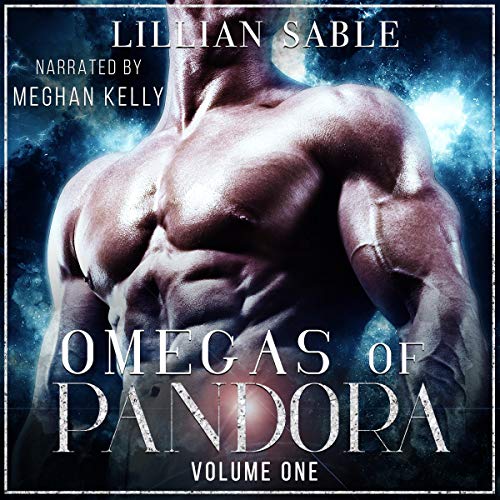 Omegas of Pandora, Volume One

By: Lillian Sable
Narrated by: Meghan Kelly
Try for £0.00

She never wanted to be Omega.

Ianthe keeps her freedom because her dynamic is a carefully guarded secret. Omegas are rare and highly prized, but they have no rights. An Omega is the property of whatever Alpha is strong enough to claim her. Ianthe toils in the slums, pretending to be Beta, so she can hide from a world that wants to make her a pet in a gilded cage. Legion, the Alpha and brutal cartel boss, believes her to be Beta. When he discovers her deception, nothing will stop him from claiming her.

But they will both be put to the test by the corruption that plagues the city of Pandora. Legion wants to keep her in a gilded cage like a favored pet, but Ianthe craves freedom in a world that refuses to allow it. He is the only one who can protect her body, but his obsession threatens to consume her soul.

Omegas of Pandora, Volume One is a 107,000-word novel featuring an over-the-top Alpha in a dystopian world and enough heat to burn. It has previously been published as a series of novellas, but can be read as a stand-alone and ends with a happily ever after.

What listeners say about Omegas of Pandora, Volume One

OMG!! THIS IS A SERIAL RAPIST'S GUIDE

If you like to manipulate and rape small defensiveless women oh, this is the book for you. All I have to say is that this book is disgusting and I didnt enjoy this so-called "dark romance" at all. There was nothing romantic about it. They should have just called it "disturbing".

This was an extraordinary story of a sweeping and relentless love that grows from confusion and hate. This was a story that held my heart in its hands and molded me into something more then myself. I saw a beauty out of ugliness, and the transformation was articulate and astounding. The relentless pursuit of the heart of the one that was highly desired and loved wrecked my heart anand mind. I adored the journey of patience and persistence to bring understand and clear a lifetime of confusion and misinformation. Nothing could have been more appealing and heartening. What a marvelous gem!

If the story itself wasn't marvelous byitself, I was gifted withthe fantastic talent of Meghsn Kelly! She spoke life and heart intimacy precious character, and I feel in love with each of them What a fabulous treat for my ears to take in the beauty of literature meeting auditory pleasure. She never fails to entertain and delight. This story was no exception. What a beauty to experience and enjoy! You will not be disappointed.

I actually struggled to finish this book. I bought the audible version liking the way that Meghan Kelly read in the sample, however, I really like the way she used her voice for Adrian and I really felt that the voice used for him would have been better for Legion, it was deep and silky. Meghan, often when she was speaking as Legion sounded like a computer and you could tell she was trying overly hard to make her voice very deep. The female character was beautifully done and I enjoyed listening to the emotion that the reader gave the character.

Listening to Legion forcing an estrus by drug was not something I found to be sexy or enticing as it just made the book feel really dirty and not in a good way. The continued "forced"pleasure kept me shaking my head. The book just took a complete downturn once she was his prisoner, even though the story continued to progress slowly. I felt like the two main characters really didn't connect...There was a disassociation between what was going on politically in the world and what was going on between the H&H. I felt that they didn't grow to love each other, it was 'oh I'm having a kid, so now I need to care about the father because I'm biologically made to feel this way.' and the female characters constant back-and-forth on how she enjoyed the pleasure but she hated him just drove me up a wall.

I just kept waiting for the male character to do something like totally nice and compassionate for the female character so she could see something beyond the controlling stoic alpha character and it never came until the very end of the book when he's touching her softly because she's carrying his child....Why did it take so long for that to happen?? That should have happened toward the middle of the book and instead we don't get to see how the two characters are loving toward each other until the last 10% of the book. I really really wanted to like this book, but this is my only read. Im going to try her next book and see if there is a change and hope the continuation -if there is one- only gets better.

Perhaps if I had actually read the book and not gotten it on Audible, I would have enjoyed it more. Space, aliens, apocalyptic futures, and romance are my favorite.

I found this book very interesting. It has a little bit of everything: love, politics, friendship, betrayal, family &more. It had me captivated from start to finish. Looking forward to Volume II.
I think it would be a good idea to make a movie based on this book. I’d like to see if I envisioned the characters similar with what the author had in mind.

The way Meghan Kelly narrated this book was just incredible. I couldn’t believe that all the different voices came from one person. Not only does Meghan enunciate every single word, but she does it with spot-on intonation. I love her work!

I must admit that I was rather pleasantly surprised with this story - it was not what I expected at all.
This story itself gripped me in its clutches and wouldn't let go.
The only thing that I had a small problem with was the multiple sex scenes which I thought could have been cut down a bit. Yes, I get it, they were a new couple and the attraction between them was fire hot and they had sexual relations quite often (and yes it tends to sell well) but I'm of the opinion that its not necessary to have so many graphically detailed scenes every time, where some of them could have gotten away with a few hints and not full blown scenes.
Besides this, as I have already said, the story was gripping - the characters strong and really well drawn and the narration in the audio book was amazing with Meghan Kelly doing her usual with well matched voices to help make the story more vivid.
I requested and listened to the audiobook vesion and my review above is voluntary and unbiased.

Poor copy of born to be bound

Read Addison Cain Born to be Bound. A brilliant book. This is a Very Pale Copy of that book. I have returned it unfinished. Will just listen to B to B Bound again. No idea how the author can get away with this.

One of the WORST narrators!

A watered-down version of BTBB by Addison Cain. I can appreciate the omegaverse world has certain tropes that we can come to expect, but being able to pick out specific phrases that overlap with another author's work is quite distasteful. Not even taking that into account, this story just fell flat. While the plot itself seemed decent enough, the characters were boring and not even close to being well-developed. I doubt I'll be reading anything else by this author.

I really liked this book. Although it did make me cringe at some parts, but it was great. it had everything in it, I couldn't even stop listening to it and the narrator did a very good job especially with the ML voice.

I mean it’s all pretty expected omegaverse stuff but it is particularly well done & more than just dub-con erotica(though it is that too). My only beef would be that Ianthe is TSTL but hey ¯\_(ツ)_/¯ it’s the omegaverse. I liked it a lot and look forward to more stories set in this iteration of the omegaverse.